The shooting in Arizona is tragic. But at this time, the facts are still coming in, and there is other news going on at the same time that needs attention. One of those news stories is the impact of the man who structured the Defend Ohio rally up in Columbus to protest John Kasich’s position on organized labor is a Socialist!

Doc Thompson had a great banter with a spokesman from Defend Ohio, a group I had never heard of because it was apparently formed just last weekend to attack John Kasich’s Administration before it could even get started. But the fellow came on WLW to discuss his position, and for that I give him credit. Listen to that conversation here: 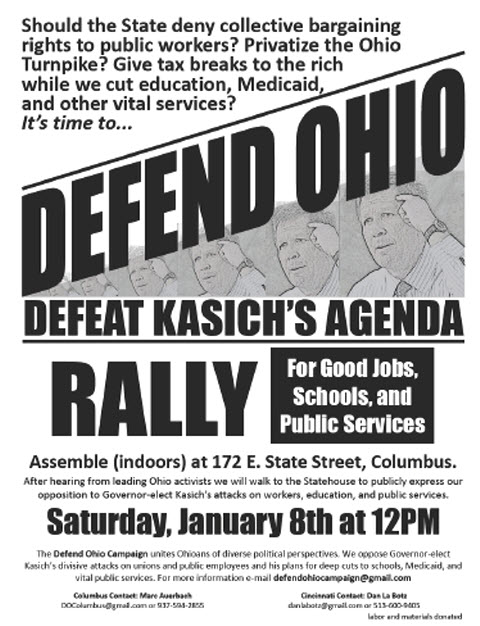 If these people weren’t so dangerous, in trying to compete legitimately in the battlefield of ideas, I might just pat them on the head and encourage them to keep learning and trying. But, as I’ve discussed on this forum many times and in many ways, socialism, communism, progressivism, imperialism, and on and on, are infantile mutterings of the lazy, collective oriented that lack true courage, because they seek to hide their ambition behind a government entity that they wish to use as a bargaining chip.

I have news for those childish minds. The country was built on capitalist principles. Not socialist principles and unions. In fact, the growth of our nation has stopped since socialist started penetrating our political culture and used the aspects of American Culture we collectively feel guilty about, like slavery, like our treatment of women, and the handling of the poor, to manipulate the political spectrum in a way that has made the United States less competitive. For people who believe such things, their minds are like shallow streams and their recollections of American History are just as deep. American History may only be as deep as a mighty river, but there is much more under the surface that makes up the contents of the river. America is not just simple poor against rich, working man against the white-collar man, black against white, men against women, its swirls of all those things and a lot more to add. Such duality in thinking is only useful to small-minded souls that can’t see beyond their individual cages.

When I heard the interview above on Doc Thompson’s show, I thought the man from Defend Ohio was naive, but well-intentioned, and I had figured he just needed to think things through a lot deeper. But now I know after a little research, that the people behind this rally are socialists! No wonder they don’t like Kasich!

Before 2010, I thought communists and socialists in our American society was something that was attempted during the McCarthy era, and even then, I actually thought that McCarthy was far-reaching in his pursuit to weed out communists. I thought that because I believed what the media told me, that Joseph McCarthy was a right-winged-paranoid-do-gooder. I started to question the media when I saw that they used the same approach to attack Kenneth Star, when he investigated Bill Clinton. Star was just doing his job. Clinton had flat-out lied in federal court. It happened right in front of our faces, so that made me question the reporting of the socialists in the McCarthy hearings.

Now, the evidence is everywhere. Socialists have their own party. They try to put up candidates, they have infiltrated unions, newspapers, television, Hollywood, publishing. They are a legitimate competitor for political ideas and they have done it under the radar.

So now they have met at the capital of Ohio on January 8, 2011 to protest a Governor that is trying to bring capitalism oriented ideas back to a state to attempt to save that great state from the damage done by socialist that have infiltrated the political culture for decades. The difference between now, and when they originally started, is it’s out in the open who and what they are. And America has to make the decision about what they want to do about it.

It’s ok to be wrong. And socialist are out-of-their-minds wrong. But it’s not OK to wreck American Culture to pursue the infant diatribes of half-baked minds.

Now, to understand what is behind Defend Ohio, read this article. I put it up here so it doesn’t disappear after this rally turns out embarrassing for the organizers.

Supporters of the Dan La Botz, Socialist for Senate campaign of 2010 met in Columbus, Ohio over the weekend to found a new organization and launch a campaign to fight for jobs and public services in Ohio—and they pledged to resist the policies of Republic Governor-elect John Kasich. Dan La Botz was the Socialist Party candidate for the U.S. Senate in Ohio in November 2010 and received 25,000 votes.

The labor and movement activists from cities throughout Ohio created the Buckeye Socialist Network (there will soon be a BuckeyeSocialist.org website). The Network’s first campaign is called DEFEND OHIO and will focus on defending public employees’ jobs and public services.

“Governor Kasich has unleashed a class war in Ohio,” said Dan La Botz. “And we intend to fight back. Kasich’s inauguration is the ideal occasion for Ohio’s working people to protest in at the Capital in Columbus and to show the governor that he is going to face four years of fierce resistance by unions and social movements.

“Kasich,” said La Botz, “pledged to revoke the union organizing rights of home care and child care workers in Ohio. This is a vicious and despicable attack on the some of the state’s hardest working and lowest paid workers. And it is not so different from President Obama’s recent promise to freeze the wages of Federal employees. These attacks on public employees parallel the private employers drive for two-tier labor contracts intended to lower wages and they parallel attacks on social programs for low-income people in our society.

“We will be organizing working people to fight to defend public employees’ jobs, their wages, and their right to unionize. We will be fighting to defend all of the many services that these workers—teachers, social workers, water workers, garbage collectors, and so many others—provide. In doing so, we will be beginning the fight to rebuild the power of unions in Ohio.”

Union members from the Teamsters, American Federation of State, County and Municipal Employees, American Federation of Government Employees, Communication Workers of America, and United Food and Commercial Workers were among those in attendance at the founding meeting of the Buckeye Socialist Network. Representatives from Cleveland, Columbus, Cincinnati, Dayton/Yellow Springs, Canton, and New Philadelphia attended the half-day meeting.

Hey, you can’t make this stuff up. Progress Ohio has their name all over this. These “types” of people are in the minority, but because they are motivated radicals, they must be dealt with equal passion from those of us that think correctly. And yes, there is a correct way to think and an incorrect way to think. Individuality and the power of the individual are correct. Collectivism is wrong. It allows the worst of people to live in a state of mediocrity. This popular video of the New York Public worker wrecking a car on a snowy street is a perfect example of what you get when you allow people to live in that state of mediocrity. This is your typical union employee. And I say that from lots of experience.

Don’t ever ask me to pay for people like this with tax dollars.