If you’re like me and admire greatly the work of Ayn Rand, then you’re looking forward to the film being released on April 15th called Atlas Shrugged.

I would consider this a very important and timely film. One that contributes to our culture and it gives me great hope listening to the producer explain to Doc Thompson that the film makers are doing everything in their power to remain true to the original book. The last time a filmmaker spent that kind of time being authentic to a body of literary work it was a little film project called Lord of the Rings.

The Atlas Shrugged series will be divided into three parts the first of which is coming out this April. Hollywood will be watching closely how this film is received. It is entirely possible that the success of this film could change the direction of Hollywood for years.

Why? Because Hollywood is dying on the vine. They are holding onto their former glory with mere finger nails. I know a few friends in Hollywood and even worked on a project or two. (Here is the latest. Everything you see that has a whip in it is me doing stand in work for Peter Facinelli. And yes the stunts are all real, no CGI, including the backward whip crack of the cigarette.) See a more detailed article on that here. In other words I know a bit about what I’m talking about regarding the film industry. Book publishing is in the same boat really.

The young people making films today are as lost as the films they are producing. The other day my wife and I were discussing whether or not we wanted to see the film Paul. I told her it looked a lot like ET to me. We’ll probably see it, but will come away feeling a hunger for more.

But recently, where are the “big bold films?” Well, I dare say that Atlas Shrugged will be one of those films, and once released, and proven successful, will send a powerful message to Hollywood and the liberal film critics that have attempted to steer the direction of our film industry into a ridiculous collectivism that is obviously not what Americans want in the movies.

I’ve said it before, it’s not an accident that Star Wars is still one of the greatest movies of all time, not because of all the special effects, or cute little creatures, but because it has a fundamental message of the individual against the collectivism of the Empire. Such themes run deep in the human conciousness and are understood in the context of a story. It’s not always easy to apply those understandings to real life, but the human mind understands the dilemma well.

Go to the Atlas Shrugged web site and let them know you want a print of the film to be shown at Newport on the Levee. Also, contact that theater so they can set up a screening with the producers so we can help that film prove how powerful the viewings in the Midwest are. This will convince Hollywood to release the film on a wide release, which is of paramount importance.

Go to this link and just type in your zip code to cast your vote to bring this great film to Cincinnati, or whatever city you live in.

Here is the link to the home page of the film website.

Hollywood through films and television forgets time and time again that just putting special effects into a film with stunts and set in time periods similar to classics like Star Wars, or the Godfather, or an epic like Lord of the Rings won’t guarantee success. Citizen Kane is not one of the greatest films ever made because it had great effects or even great acting. Those films are great because they mean something, and the contents of the story don’t leave the viewer by the time they get back to their car in a theater parking lot. Stories filled with big ideas matter. Even low budget phenomena’s like Smokey and the Bandit from the 1970’s hold a special place in the viewers that watch it, because the movie is about individualism in its most raw form, and that’s what America loves.

It’s one thing to battle politicians for fiscal responsibility. It’s probably more important to battle these problems from the aspects of culture, and our movie industry is one of the greatest communication devices of our culture. Atlas Shrugged and the success of its subsequent films will achieve a great deal to educating the millions of young people that are currently getting the wrong message from MTV, the film Hangover, and American Pie 5 or 6, and TV shows like Two and a Half Men, and How I MetYour Mother. Those entertainment pieces show exactly why our culture is failing. And it’s time that new myths communicate the important attributes of American culture, and one of the best opportunities for that to happen is in Atlas Shrugged Part 1.

Some of my favorite scenes brought to life! 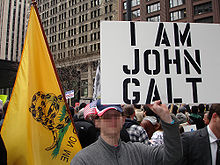 27 thoughts on “Bring Atlas Shrugged to Newport on the Levee: Ayn Rand’s Epic Novel is coming to a theater near you.”