Darryl Parks of 700 WLW had my friends and me on to discuss many of the local school tax levies in order to compete on which school will get the full fury of the 50,000 Watt Flame Thrower known as The Big One in Cincinnati. That Flame Thrower of a radio station reaches 38 states and part of Canada so the prize is obvious. If you want to get out your message of a school system which needs to defeat its school levy, you want The Big One to broadcast your message. Listen to that broadcast here, which contains many very good points from school districts all over Southern Ohio.

At Lakota while this broadcast was roaming across the Eastern United States, mailmen were putting the letter you see below into the mail boxes of “select” supporters of Joan Powell, the school board president. Have a look at that letter for yourself.  The first thing that should send an alarm up your spine is that Joan chose to put pictures of her grandchildren on the letter, that always means there is something hidden underneath the surface of the message. 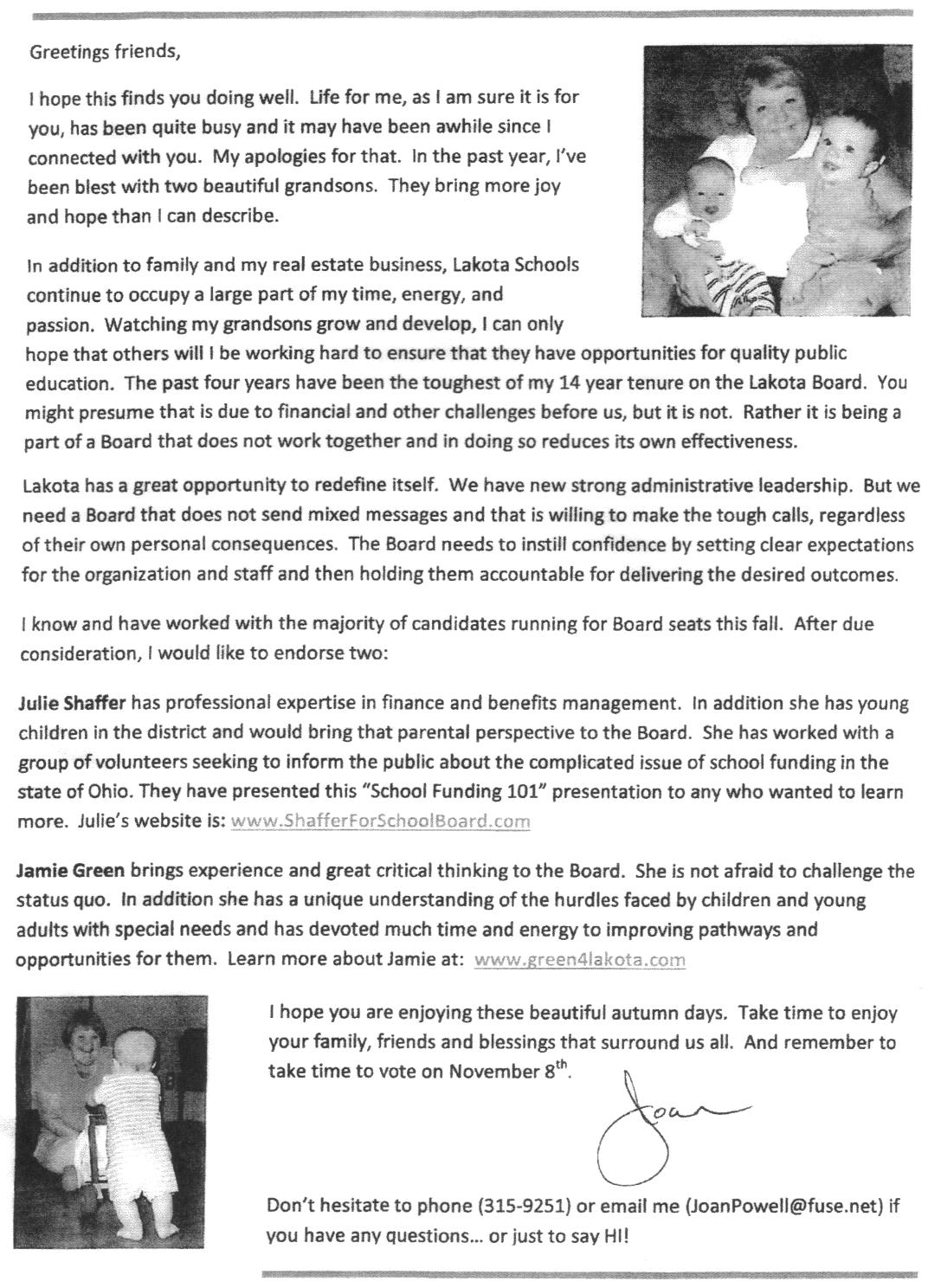 I get a lot of material from “school insiders.” In this business of digging for the truth you need such people to give you new information. Last year we had a few such people and they provided very valuable information such as the letter at the link contained here, which came from a principal at one of the schools after the levy was defeated.

It is always interesting to see what people who work for the district think when they believe that nobody is looking. Anyway, the “insiders” are a growing number of people who see that the situation they are employed under is wrong and they’d like out of the straight jacket they are forced to work under. Many of them do not want to be in a union and if Issue 2 holds up this repeal attempt, they can opt out of the union to be free to be employed without membership. But until that day arrives, they will achieve a level of rebellion against a system they disagree with by sending me information. This year there are more than a handful of such people. In fact, I have so many that I can hardly keep up with the material they send me.

And that’s how I got Joan’s letter, which went to selected members and staff who Joan thinks are her friends. The letter taken alone is not bad or illegal. But what it does show is that Joan is blaming many of the problems at Lakota on the school board “not getting along” and “divisiveness.” The letter is an endorsement letter for two members running for seats. Joan wants to see Julie Shaffer who has worked on the Pro Levy Campaigns in recent years including this latest one, and Jamie Green who actually used to be on the board and served as its president during the years of 2005-2009. (wait a minute…….isn’t that the period of time where the unions walked all over the school board during the labor dispute which caused this current financial crises?)…….YES!

I find this letter a very bad decision on behalf of Joan. As president she should understand that she is responsible for developing a “team” and playing games by eliminating other board members in favor of her “hand-picked” candidates is bound to cause trouble. As president of the board, it’s her job to build that unification, not blame members on their divisiveness. That’s called management. You may not like the people you are working with, but as president, it’s the job of leadership to pull everyone together. Not blast them apart. Chances are the new school board members will be Mark Etterling and Lynda O’Conner. I personally like Luke Hall in that mix if not this time, then for one of the next three seats that are coming available, Joan’s included. My question is what does Joan think will happen when Lynda gets re-elected and has to sit at the table with her, knowing that Joan attempted to get her booted off the board? Does Joan think that Jamie Green won’t become power-hungry for the presidency again, and won’t challenge Joan for leadership? What about Julie, who is quite smart, but is a tax and spend candidate? Joan knows where the problems are yet she picks two candidates who are pro levy candidates. She wants to go backwards. Does Lakota need more school board candidates to eat out of the hand of the union? Isn’t that what caused the whole budget crises? YES!!!!!!!!! It is!!!!!!! When $165 million dollars, (which is unofficially $250 million dollars) is not enough money and we have a school board president that says that’s not enough, and is openly campaigning for candidates who think just like her, I’d say the source of the problem is clear.

At a recent “meet the candidates” event I gave a review of who I’d like to see for school board, and Jamie and Julie are at the bottom of the list. They are not business friendly and believe that more taxes are the fix for problems they are tasked to manage, which isn’t managing at all. Anyone can balance a check book if the answer is to always inject more money, because what’s there to balance? You ask for more money till you meet your expenses. That’s their thinking, when it should really be to reduce expenses until the books are balanced, and that must come from the uncomfortable task of reducing the average salary at Lakota that is over $63K to the mid $50’s. That is hard, and it is obvious that Joan and her “pick of the litter” don’t have the mind to do it. (See my review here)

Worst of all though from Joan is that short-sighted politicking she is engaging in for a job that pays little money, just pocket change for each meeting the school board has. Why? Are these people so desperate for attention that the title of school board president actually means something to them? Is it the power to control a multi-million dollar budget, probably? But I would have hoped that after all that has been discussed over these last two levy attempts that somebody would have learned something, and instead Joan is clinging to the failed model of the past which delivered us to this time and place. And that’s why not only her two picks need to be defeated, but Joan herself when her seat comes up in 2013. Only by electing good school board members who aren’t power hungry for the presidency and political games, can Lakota get its arms around the budget problems. The last thing we should do is tax ourselves more to put into the lap more money for these people to squabble over. The real answer is in systematically replacing these chatter boxes with legitimate, and caring people who will put the entire district into focus with good management, and not treat the school board like a girls club of levy supporters.

VOTE NO on the LAKOTA SCHOOL LEVY. Vote for any candidates except for Jamie Green and Julie Shaffer. And VOTE YES on Issue 2 so this school board can actually manage its costs in the future and not keep asking us to pass school levies while people like Joan toss that money into a bottomless pit called the Teachers Union.

And to back up these assertions, prepare to tune in to 700 WLW over the next three weeks, because the FLAME THROWER is coming in your direction at Lakota!

Listen to Julie Shaffer on WLW discuss the teaches contract that Joan Powell and Jamie Green negotiated which we have to pay for. CLICK THE VIDEO!


For the answer to everything click the link below!

17 thoughts on “The Joan Powell School Board Scandal: A lesson of what not to do at Lakota”