(To see The Next Day Part 1 from last year click here):Doc Thompson of 700 WLW and I talked about the election results as the smoke cleared on the “Day After” the Election of 2011.


Many of the reporters I spoke with on Election Day wanted to know what I was going to do to “celebrate” on that very contentious night. “I’m going to play Wii Golf with my wife,” I told them, which garnered some strange looks.

While we did just that I did watch the numbers come in off The Butler County Board of Elections web site, so my mind was on other matters. Issue 2 failing demonstrates how the public unions have managed to garner 43.4% higher wages than the rest of us. They are an organization of deep radicalism that is prepared to yell, march, and even mislead to protect their hive just like a swarm of insects. I’ll have much more on that later, because my focus as the smoke is clearing upon the rising sun of Wednesday, November 09, 2011 was on the school levies.

Issue 2 was the fix to the school levy problem, and I saw that as the results came in, that the same “machine” of the public unions that we saw in the Issue 2 debate had taken its toll on the school levies. Little Miami on the ninth time passed its levy and Lebanon did also, both by margins of less than 200 votes. Both of those schools are on their second attempt within the same calendar year, and show clearly how school systems controlled by radical union elements seek to beat down the tax payer until the taxpayer just says yes.

I was also dismayed to hear that Fairfield passed their levy. Fairfield like Lebanon has the very unfortunate situation where they have many apartment dwellers that do not pay taxes, but can vote. So they are prone to vote for school levies because by the time their landlord raises their rent, they’ll most likely move on to a new residence. But out of all the public schools in Southern Ohio, it was Lakota that was the focus and it was the third time that the No Lakota Levy group had organized to shoot that levy down. As the evening closed and I was on the 15th hole our Wii Golf game, it was apparent that Lakota’s Levy wasn’t just going down to defeat, but was going down soundly 54 to 46 percent. That means from the last levy attempt to this one, even after the district cut busing, cut electives, made sports pay-to-play, and even lowered the levy amount that the defeat margin actually gained 1% to spread the margin of victory from 6% one year ago to 7% now. Even with all the dirty tricks that get played, especially the massive sign theft and vandalism that went on during this campaign, voters saw through it. You can listen to Doc Thompson and me discussing this very issue right after I returned home from voting on Election Day.

Gaining a whole percentage point said a lot from a community who had seen all the dirty tricks in the OEA/NEA handbook, the same dirty tricks that are being applied to all the other schools, especially Little Miami. The goal is to wear down the opposition gradually by attempting levy after levy after levy until the people standing up against the measure just give up. That is the way the unions operate, and is exactly why Issue 2 should go right back through the legislature, for a relentless pursuit to jam it down their throats till they run out of money and energy. That’s what the unions have done to the public after all. Make the unions defend against it next spring and summer, like we have to defend against tax levies every 6 months, and let’s see how long they last. They taught us this game! But in the case of Lakota, with a new superintendent, nearly $30,000 spent to shove another tax initiative down the community throats, Lakota lost ground. $12K of that $30K was spent just on consultants who advised Lakota how to garner positive public reaction to their message, which even as the closing minutes of the election ticked down, Sandy Wheatley pictured here laying on the ground at a party for the Move Forward Campaign was having to celebrate their efforts…………?????????????……….stated, “We said all along this was the community’s choice and it appears that the community said it is not ready to move forward.” 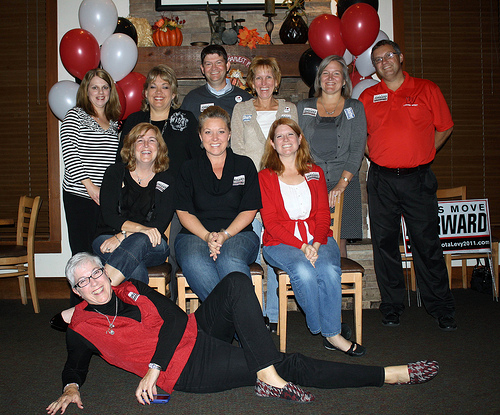 That wasn’t the worst comment. Here’s another, “I just don’t think people, who don’t have children in school, think about what the ramifications really are. They just don’t want to pay more money. Trust me, I don’t want to pay more money, but I have to make a commitment to the community I live in,” said Felice Fishman parent of two children in the Lakota school district.

“It is very frustrating,” said Chiqui Aull, who is a parent of two in the Lakota school district. “It doesn’t make sense to vote against it because everyone who owns property in West Chester just had their property go down.

“It is sad because people moved to West Chester for Lakota because of the school system and they could end up choosing Mason or Fairfield, who just passed a levy.”

I find it absolutely amazing that all those statements from people who seem intelligent are all taken straight out of the union playbook of prepared emotional statements intended to manipulate the public, just like the unions did with Issue 2. As my wife and I finished up our golf game I wondered if those people even knew that they were “programmed” to believe such things. Probably not, their static patterns are so intrinsic to their state of consciousness that they utter things from their mouths which are not their own, which they’ve simply heard from someone else. They are unknowing foot soldiers to tyranny, a system that uses our kids, and our community in service of a larger system, an organism onto itself called unionized labor.

By gaining the extra point this time it disrupts this union plan created by the OEA and maintained by the OSBA in Columbus, with smiles of course, which uses incremental cuts to services in order to extort more tax money from property owners, and the residents of Lakota stood up for themselves, and that is good to see. To the parents who are in fact the selfish ones in this matter because they allow union radicalism to cloud their thinking, and have their entire focus on their little child within the bubble of public education, they fail to see the bigger picture. They forget that there are other elements to a community that make it great, with Lakota just being one element. 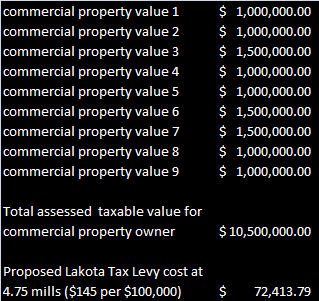 To paint the picture let me direct your attention to the spread sheet shown here which will give you some idea what a good friend of mine who owns nine local businesses ranging in value from $1 million each to $1.5 million pays in taxes. On Election Day he is already paying a substantial amount of money in taxes not only for his personal residence, but for his business properties listed in the spreadsheet. If the Lakota Levy had passed, he would owe roughly an additional $72,413.79 in taxes because commercial property is assessed at the same amount as residential property. Many of the parents, teachers and administrators who have large sums of money dumped in their lap because they work in the public sector and are accustomed to making 43.4% more than the rest of us, simply don’t fathom what that means, because they live in a bubble of their own reality. They would be inclined to say that my friend is wealthy, so he should “pay his fair share.” I can tell you what my friend says, “Why should I locate a business in Butler County if they are just going steal my money.” Short-sighted parents who only care for their little children don’t understand that it is the excellent commercial development along with the residential development that makes a community great, and the Lakota District is a reflection of that balance, not the creation of it.

People move to Lakota for the schools as one factor, but other factors include highway proximity, job creation, entertainment options, and tax rates. When tax rates are high, commercial property moves elsewhere and parents who have their kids raised sell their homes and leave to avoid the high taxes. That is the essence of the problem that all those people pictured in that party picture simply don’t comprehend. Those Move Forward supporters don’t see it because they are in an education bubble that we fund, and have lost touch with reality.

That is why the No Lakota Levy says that before there is ever another levy attempt that the administration at Lakota should sit down with the teachers union (LEA) and require them to bring their compensation costs into the range of the approved budget. That’s what the election was all about, what is the “approved budget.” This community is not in the mood for the silly union games of extortion, of inconvenience in order to force higher taxes. It is the responsibility of the employees of the Lakota School District to maintain the high level of service we expect. And we expect our management to control the costs. Not for the costs to control management! If there are members of the LEA who don’t want to comply with this fact, then look for a job in a different district and see if they are willing to pay for the bloated salaries. Those employees could be replaced easily with more affordable and eager young professionals.

So Lakota drop the union radicalism and play ball, or we will do this again, and if you think this effort was more aggressive than last time, I’m sitting on information that will make the next time even worse. So be smart, understand your role in the community, and don’t be ridiculous in your compensation. What you do next will determine much.