Doc Thompson is right, we do need new ideas in education, and those ideas are out there. In fact, we’ve covered many of those ideas here at Overmanwarrior’s Wisdom. Most of the current new ideas about public education can be seen in this summary for School Choice at the link below. At the end of that article are several videos produced by Edutopia, which I am a huge fan of, a group put together by George Lucas to drastically improve education and give teachers the tools they need to become better. (Yes Doc was there. He came because he really cares about solving the problem.)

However, innovation requires change. Staffing levels of schools will not need to be as high as they are currently as innovation is introduced, so school administrations should be able to drive down costs, and will have to fight the teachers union and their desire for the status quo to implement those changes. After all, it is the teachers unions who believe that the community works for them and not the other way around.

The teachers unions in my assessment are holding education back and are keeping America from improving, and they do this in two ways. First they are protecting their incomes and pensions, because teaching is their livelihood, so they of course are more concerned about such things. Second many teachers have embraced radical leftist ideology and they are certainly playing their part for social reform around progressive politics. To show just how bad the situation is, have a look at this video below. Some of my friends over at Freedom Works attended BlogCon11 and were met there by protestors from a local school, organized by their teacher Celia Bard in protesting the conservative bloggers. Have a listen to what they were saying and why they were saying it. These are 17-year-old kids and students of St. Mary’s Academy.

I think this makes a great case to the kind of issues our kids are learning in public education, and as long as this garbage is going on, our kids will continue to not learn what they should be, and programs like Edutopia will not gain any ground. Doc’s dream of online learning will be a fleeting one because it is evident by the radical unions that education is not the goal, but indoctrination and the breeding of future radicals is. If kids are learning real material online, they may not be prone to the teachings of radical left-winged teachers and their social agenda in the classroom.

This is actually much worse and wide-spread than you might think it is. After the election here at Lakota in Cincinnati, many of the members of No Lakota Levy have received threatening emails, letters and comments for voting against the levy. It is stunning the audacity some of these teachers exhibit, and the PTA moms who kiss their pretentious asses. The radical self-centeredness of a very good school like Lakota is mind-boggling, and we’ve tried to reason with them and explain how they can lower their costs while still maintaining their excellent rating. Their response is to quickly blame any member of the 18,000 who voted to put that tax levy down and is nothing short of astonishing. They forget they are the employees of the community; the community does not work for them. In light of such actions the vandalism experienced during the campaign against our property makes perfect sense.

This is the same radical element seen from the students at the BlogCon2011. And it is that radical element that is holding down education to the kind of reforms Doc Thompson is talking about.

How badly are reforms needed? Well, since we’re talking about Lakota which somehow justifies the harassment of business owners from radical PTA moms and teachers who want to boycott businesses because those businesses question the necessity for a school levy, let’s examine how truly good Lakota is.
The spreadsheet below comes from the Ohio Department of Education. As you can see, Lakota which is considered one of the best in the state is actually number 71 on that list out of over 600 schools. That tells me there’s a lot of room for improvement. I marked all the schools that are performing better than Lakota in yellow who are also doing so at a less per pupil cost. 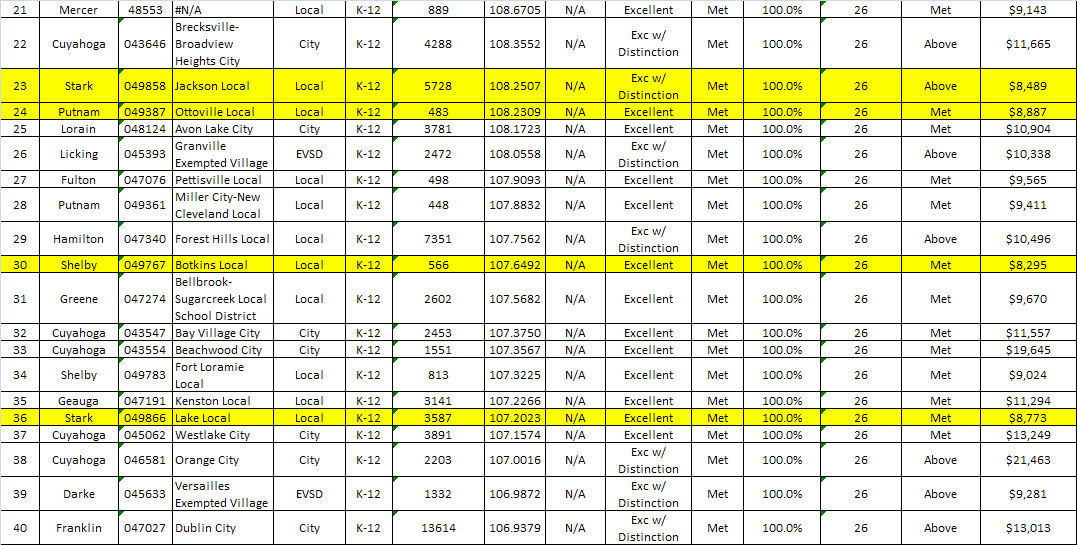 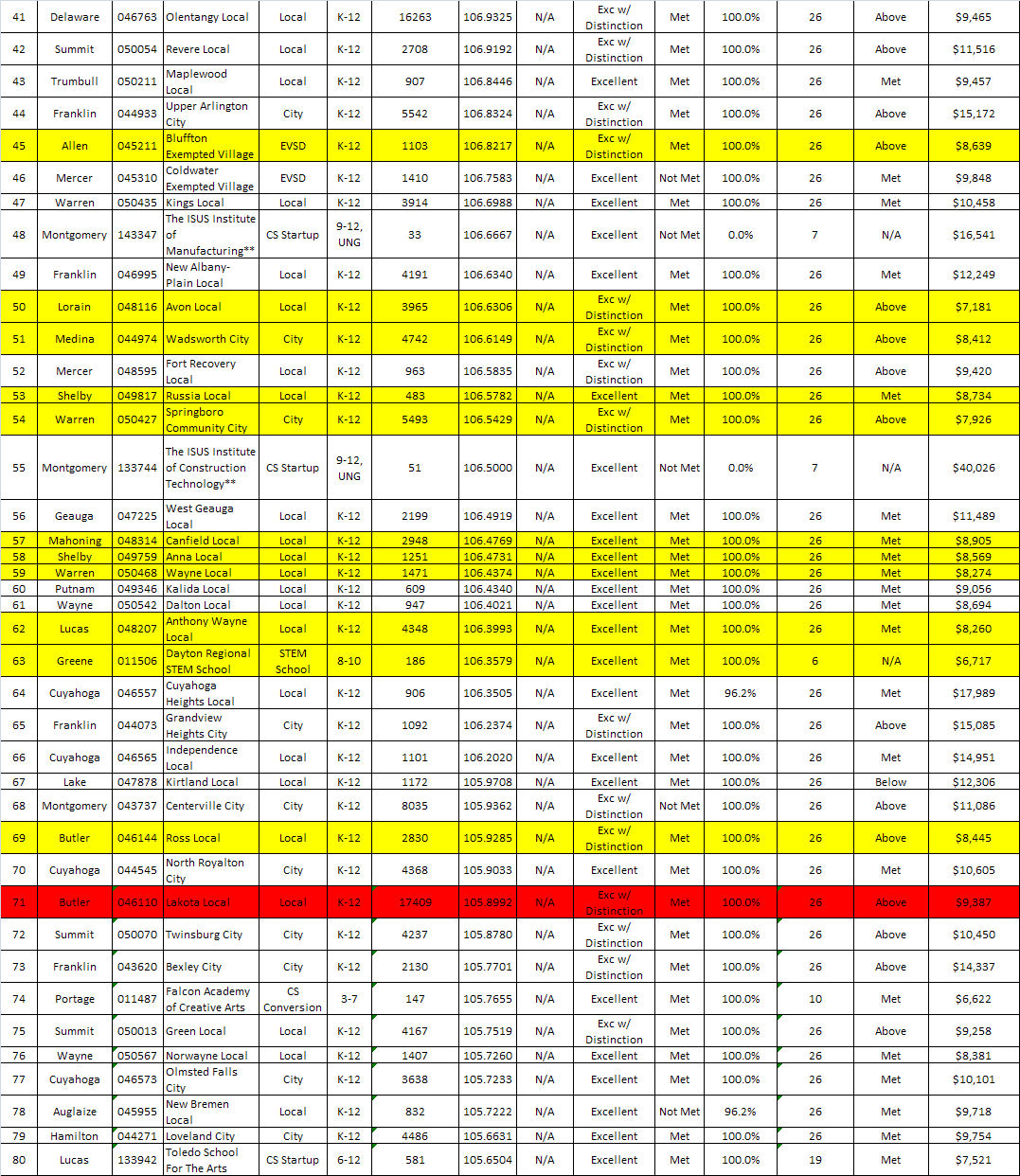 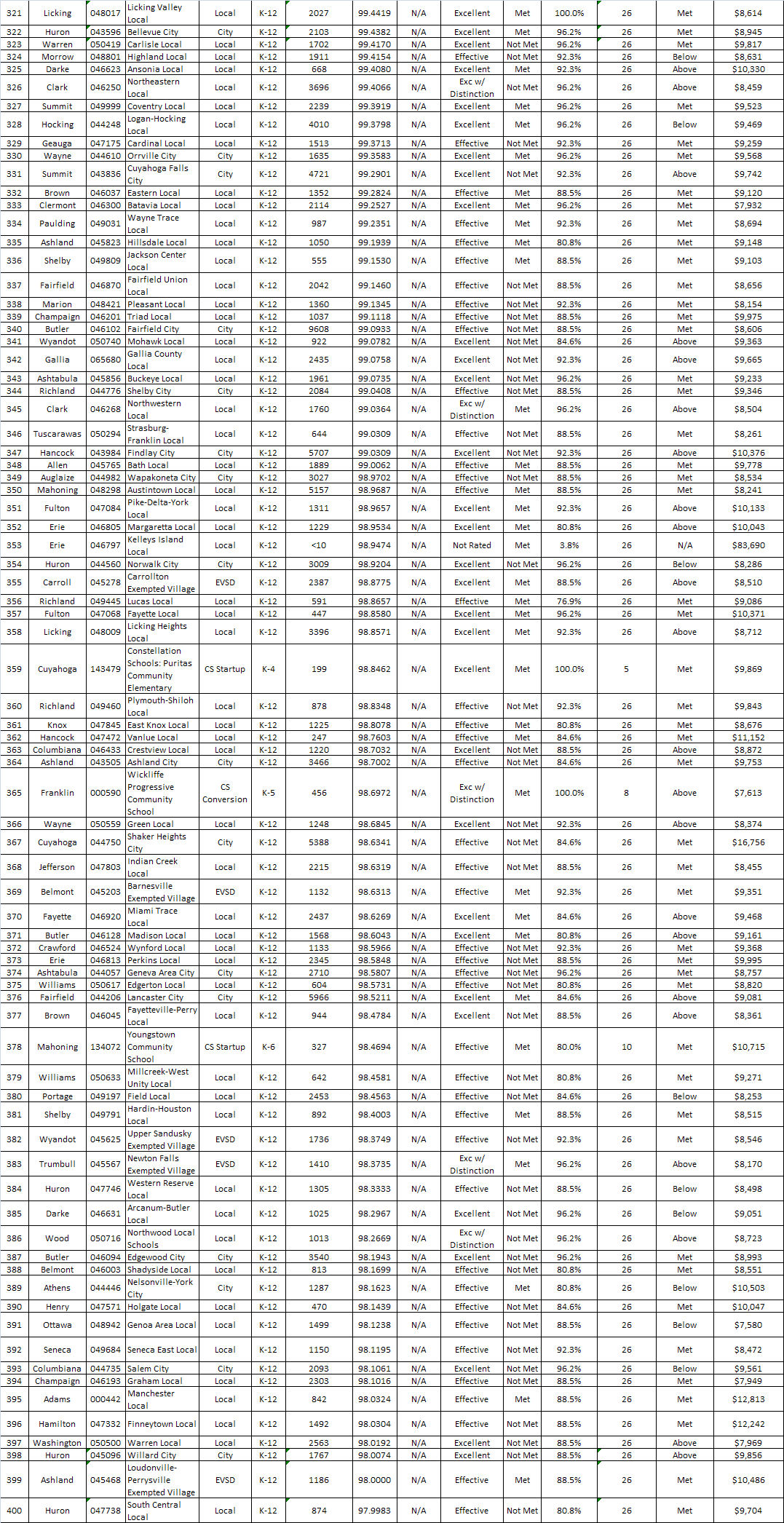 What does this tell us? Well, a couple of things. One that Lakota even though it’s considered a very good school, is not the best. It has room for improvement. Two that it needs to find a way to improve its Excellence with Distinction number to something much higher while still driving down its costs. That can be done with technology. This brings to question how much staff do we really need at Lakota, because per pupil cost is largely controlled by direct employee costs, and smaller schools with less staff are naturally going to be able to offer a lower per pupil cost in educating students. The money spent does not make a school Excellent with Distinction or make children perform better than schools with less school employees, obviously, as shown by the smaller school ratings.

The resistance to these adjustments however comes from the radical unions who live in a reality bubble and assume that they are the center of the universe, and that everyone exists to pay higher taxes to fund their livelihoods. And while in that bubble, they are entitled teach our kids the fundamentals of progressive politics.

Public schools could operate much more efficiently if they stuck to the basics, cut their staffing sizes down particularly among the administration dramatically so they could offer cheaper per pupil costs, and kept the radicalism of the unions out of the classroom. Until those things happen, funding will always be a problem and American education will take a back-seat to the rest of the world who are actually teaching children, not trying to fulfill the quests of the 60’s flower children who now run education.

The trouble with modern public education is they are a self contained entity that seeks to isolate those who fund it.  The only members of the community who are embraced are those willing to drink the Kool-Aid they are selling.  Even at Lakota, who obviously has a long way to go to become better, the administration all the way up to the top aligns itself with the unions, who are not performing at an exceptionally high level nationally.  Oh, of course they are according to their own internal measures, but in the scheme of reality, there is much to improve on.  When the Lakota levy was defeated for the third time in 18 months the first thing the superintendent said was, “but the teachers have already agreed to a pay freeze.”  Such a statement informs the union leadership that they have an ally in management, and that nobody represents the tax payers who fund all this education business.  So the plan is to place another levy on the ballot for a fourth time, or a fifth time, or a sixth time till they ram it down the community throats.  This is no different than a screaming child who cries until they get what they want.  No attempt is made to work within a budget the community establishes at the ballot box, which shows a tremendous disrespect for the community in general.  The union doesn’t even try because the education system is all on the same side, from the superintendents all the way down the line.

It’s not that I hate education.  I hate how expensive it is and what it gives us socially.  When you hear the girls in that video above repeat comments directly taken from the Communist Manifesto or the work of Saul Alinsky, it is because their teacher instructed them of those qualities, and I don’t want to pay for that kind of nonsense.  If there is anything we’ve learned from the Occupy movements its that our youth is coming out of public education ill prepared for life, and much of that is to be blamed on public education and the lack of participation of their parents who are guilty of thinking they can purchase improved education for their children to cover the personal faults of the parents.  This has opened the door for radical union types to manipulate generations of children with our hard earned money and prepare our kids for an intellectual adult life they are not equipped to handle. I would go so far to say that education is a complete social failure and is not worth the money we spend in the current form.

Even with that basic statement of social value, the spreadsheet above demonstrates irrefutably that money does not buy quality.  If Lakota which is considered Excellent with Distinction is considered great and there are others schools who are doing it cheaper who are ranked better, than money is clearly not the driving factor.  Less staff with more technology that drives down the cost and focuses the students on a neutral, less politically inspired education is much preferred to the system we currently have that believes the community works for the school, and that an endless supply of money is owed to those employees, and that their actions are beyond refute.  I have never met a more out-of-touch, pretentious group as these pro levy public education advocates who blindly support school levies without asking the hard questions.  The idea school funding in the millions of dollars would be driven by a bunch of crazy PTA moms is insane!  They suck up to the teachers of their precious little children, and demand more money on their behalf for some mysterious benefit that is not to be examined, yet that is exactly what is happening.

I would go so far to say that any teacher or administrator who believes such things as leftist ideology should be taught in the classroom and unlimited funds should flow in their direction they should be terminated and taken out of the public educational system completely. It is such minds who stand in the way of education reform and improvement.  It is in such minds who say that Lakota is great even though it is number 71 on the list, and they’ll make excuses by saying, “But we’re one of the largest districts!”  Well, that’s not good enough.  I expect Lakota to rise higher on that list and I expect the per pupil cost to be driven lower each year.  And anyone who stands in the way of those goals should look for jobs elsewhere.  Because I am not willing to pay for mediocrity, and I am not willing to pay for leftist social programming.  I am also not willing to put on blinders to the low quality of the whole enterprise just because the school of my district is not as bad as others in the area.  There is room for improvement, and that improvement should always be the driving force.