I haven’t made a secret of it, every year when we have dinner at the Fairlawn Steak House with my friends at the annual Annie Oakley Festival it’s a kind of calibration for me to get my roots firmly back in the ground. To see last year’s article (CLICK HERE). It was refreshing to see some of the old faces again, and it was wonderful to see new ones. There were some who had paying jobs who couldn’t come this year which happen to fall on this particular weekend which was unfortunate, but does happen. For the most part, the Wild West is alive and well with the group I feel privileged to know and call friends.

I’ve known Gery Deer for around a decade now as he has put on the Western Showcase at Annie Oakley for about that long. It’s a thankless job that encompasses a lot of love for the Western Arts which ranges from music to period weapons. I was asked by many people who know me in other places besides my outback hat and bullwhips if I was going to the Restoring Love event down in Dallas, Texas over the same weekend. Even though there were many reasons for not going, most of them due to time constraints, my primary restraint was not to miss this wonderful event on the last weekend of July at the Darke County Fairgrounds.

It was nice to see Lash Luke back from Birmingham, Alabama. Luke came to his first Annie Oakley event last year as a 16 year old. His mom had brought him and he attended his first dinner with us at the Fairlawn. This year he was back, this time his dad brought him. He was much faster and sharper as a 17 year old, and had improved a lot in just one year of very hard work.

He was so good that he won the heart of the young lady who was Miss Annie Oakley this year at the event that completely takes over Greenville, Ohio. She was so impressed with him that every free moment she had where she didn’t have to do “official” Annie Oakley business she was in the Coliseum at our Wild West exhibit to see him as we were cracking whips and throwing knives to a captive audience.

An impressive new whip maker named David Crain brought his act up from Middletown and set up a booth that had a lot of interest as he displayed his hand made nylon whips which were very, very good. I worked with them all day and they had wonderful balance and a lot of snap. His whips are also extremely creative as he custom turns all the handles on his own lathe. By trade he is an instrument maker—specifically drums and his whips look very much like instruments and for an extremely reasonable cost. I could easily have done two handed routines with my normal 6’ Terry Jacka 12 plait whip that costs nearly $600 in one hand and one of David Crain’s nylon whips in the other of the same length and not known much of a difference for around $130. His whips are perfect for people just trying to get into the sport as his whips are wonderful for beginners and professionals alike. 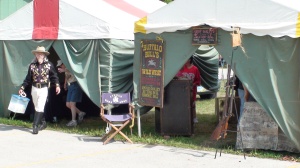 In fact Richard Best who travels the country every year with his wife Donna Daring performing traditional western acts commissioned David to make a special nylon whip just for him. Richard has several nylon whips none of them he likes a whole lot, until he saw David’s.

During the whip competitions this year David Crain on behalf of his company Heartbeat Artistry donated the prizes for the Speed and Accuracy competition, the Speed Switch, and the Bull Whip Fastdraw. The prizes were 3’, 4’ and a 5’ custom made Crain whips. 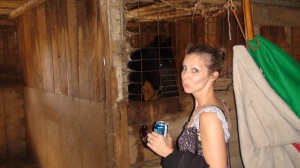 I was very happy with my performance this year even without as much time to practice as I normally do; I came away with my fastest time ever on the Speed and Accuracy competition of 11 seconds flat. The world record is 9 seconds hitting 10 targets. I hit 12 in 11 seconds which comes out to around .9 per crack. That was pretty good. If we had called Guinness for that attempt I might have had a world record, but I didn’t expect to come that close.

Usually the winning time is 12.5 seconds to 14 seconds. I’ve won before with 12.6. I also did well on the speed switch this year with a time of 18.6 seconds which is more difficult because you have to use both hands going down the target stands one way with your right hand then back the other with your left. Times on that one are normally in the high 20’s because it’s hard to be accurate with both hands and time deductions for misses are very common.

I also did well in the bull whip quick drawl, which I’ve had a problem with in the past. If you go too fast, you tend to pull the whip off to the right depending on how it’s coiled. So I backed off my speed a bit this year and hit the target squarely each time, something my son-in-law Paul is very, very good at.

He has won the bullwhip quick draw more than any of us because he has the perfect combination of aggression, patience, precision and of course speed. That’s the trick of the fast draw which was invented by Gery Deer and Kirk Bass of Bass Blades.

Because of my good day with the whip competitions my grandson will be the recipient of the whips won from these competitions when he’s born. He doesn’t know it yet because he’s still kicking around inside my daughter, but the moment he’s born, he gets the 3’ whip. When he gets older, like age three and then four, I’ll give him the longer ones on his birthdays. The whip maker David had his daughter with him and she was 5 years old and cracking a leaf out of his hands. So my unborn grandson will be expected to do at least that much. Those whips will be the perfect size to learn on for a small child and they will all match and will take him well into his teenage years.

Kirk and Melodie Bass routinely energize the crowds with their knife throwing shows that are very unique. Kirk has been throwing knives for about 8 years now, and he is one of the best there is. The Bass family concentrates on knife throwing, but they do a little bit of everything, including whips. Melodie has always participated in the bullwhip competitions having fun as she goes. While we were eating at the Fairlawn her 5 year old curly haired son gazed at me over chicken sticks. I remember vividly 5 years ago when Melodie put up a respectable time on the speed and accuracy competition while pregnant with that child. They are an amazing family.

Gery Deer and his wife were as busy as ever. They are regularly booked for whip shows, and musical acts with Gery’s band titled The Brothers and Company who are most recently known for their controversial appearance at the Murphy Theater in Wilmington, Ohio.

There they performed a song called “Big Butter Jesus Burned to the Ground” in homage to the famous statue in Monroe, Ohio that caught fire during a lightning storm. Gery currently does regular news segments for Channel 2 WTDN in Dayton as well as other television work in and around Dayton. Gery occasionally does convention and costume work for Indiana Jones because of his whip studio. 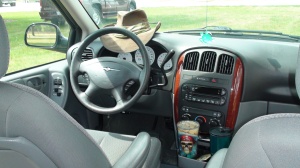 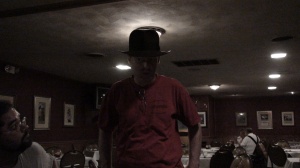 Gery has most of the official costume items of Indiana Jones except for an authentic hat as it was designed for Raiders of the Lost Ark, which is a very unusual Fedora design. At Annie Oakley this year a custom hat maker from Cleveland drove down and met Gery to give him the most authentic Indiana Jones hat I’ve ever seen worth somewhere in the neighborhood of $500. It looks exactly like the Raiders hat that is in the Smithsonian, to every detail. It even has the varied brim widths around the hat to hang down over the face more than a typical Fedora. Gery was excessively happy about receiving this new hat as he wore it to dinner after their music performance.

Like all good things, they don’t last forever. The night had to come to a conclusion at some point in time. Most of us reluctantly sat around the dining table at the Fairlawn drawing out the evening even longer, but once we started paying checks, the indication that the marathon race to the next Annie Oakley event was about to begin for 2013 became clear.

A lot happens in a year and annually at the Annie Oakley Western Showcase I calibrate myself to the true values that hold everything up, the values that support family, friendships, and nations, and all those elements are present at the dinner table at the Fairlawn Steak House

. The truth is easy to see for those who venture outside of their comfort zone just a little bit. For those who don’t, one can only feel pity as their lives are like compass needless spinning in perpetual search for true north. For me, north is in Greenville, Ohio and the friends I meet there every year. It’s in the whip cracks, the gun fire, and the sound of the knives sticking hard into a wooden backdrop. It’s the smell of fried streak fries and wood smoke from an open campfire. It’s the bright eyes of little children clapping at the magic tricks of Professor Karns, or the whip routines of Lash Luke, the roping of Richard Best and the bravery of Melodie Bass. But more than anybody it is Gery Deer who keeps it all together one year at a time performing western acts that are nearly extinct. In him it lives with perpetual hope, that tomorrow it will be alive for a new generation. 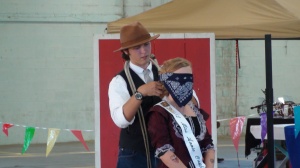 And when my grandson is born, it will begin with a 3 foot whip from David Crain. Because if I need to do anything different in this upcoming year as opposed to years past, it’s more of what has worked and less of what didn’t. For me what works best are lots of bull whips and cut targets, with memories, friends and 8 X 10’s. 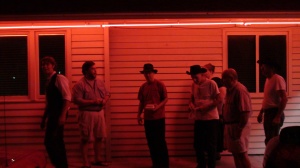 2 thoughts on “We Should Have Called Guinness: Tales from 2012’s Annie Oakley Western Showcase”