Another one of my most treasured books is a little thing that has old yellow worn pages and a paper back cover that has been looked through so many times that the pages are constantly trying to fall out of their binding.  It’s a little book my mother gave me during an intensely hot Liberty Township summer in 1981.  Our home had no air conditioning and I had to sit in front of a fan to read the flapping pages in order to stay cool enough to comprehend the text.  I have read the book dozens and dozens of times since 1981 but never more than that summer and its contents have stayed with me my entire life. 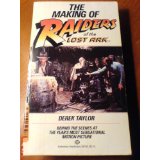 The book is called The Making of Raiders of the Lost Ark by Derek Taylor and was written as a fly-on-the wall reporter from the set of the famous film, which George Lucas knew was going to make movie history.  He knew then what millions all over world soon discover—that Raiders of the Lost Ark as a traditional throw-back to the kind of films that Hollywood used to make in the 1920s, through the 1950s was special so he allowed Derek Taylor to write a book about the making as they went along.   As much as I loved the movie, which I saw 6 times in a two month period during that hot summer of 1981, I loved reading about how they made the film.  And of all my reasons for loving the film, from the story, to the special effects which are still fantastic to this very day, to the acting, to the set design, to the incredibly good music, it was the stunts which most captured my imagination.  More specifically, the stunt co-ordination by Glenn Randall, which had a very distinct look that all films since have been measured against.  Randall was and is simply the very best in his field of occupation and his work never shined brighter than it did in Raiders where Steven Spielberg as the director and George Lucas as the executive producer knew enough about film to stay out of Glenn’s way and let him make movie magic with some of the best stunts that would ever be done on film.

This brings me to the present day where at Hollywood Studios in Florida they have a live stage show called The Indiana Jones Epic Stunt Spectacular which is personally directed by Glenn Randall, and has nearly the exact same feel as the stunts from the film performed live 5 times a day every day of the week, year after year since 1989.  The stage show is impressive; the stunt gags are some of the absolute best there is of its kind, and it is the closest that one can get to the magnificent stunt co-ordination of Glenn Randall anywhere.  His trademark style is all over the production and the show is for me a kind of recalibration to my senses.  I absolutely adore it.

The show is getting old, even though it’s still wonderful, there is talk at Hollywood Studios that Disney is going to expand the park to include more Star Wars themed attractions with a $200 million dollar Star Wars land, which will be the largest expansion in the history of the Disney parks.  Even though I cannot imagine Hollywood Studios without The Indiana Jones Epic Stunt Spectacular there is a danger that it might be cancelled to incorporate the new Star Wars expansion as the theater is currently right across from the Star Wars: Star Tours exhibit that is technically one of the coolest rides of its kind.  The Star Wars expansion is being viewed by Disney as their version of what Universal Studios did with Harry Potter.  It will be an all-encompassing experience that will be built in conjunction with the new films also produced by Disney, and will be the newest hot thing in Florida going into 2015 and 2016.  So Hollywood Studios is going to be changing, which ignited in my mind a strong desire to take my family to Hollywood Studios to see The Indiana Jones Stunt Spectacular while it’s still there.

There is a raging debate about which movie themed park is better in Orlando, Universal Studios, Islands of Adventure, or Hollywood Studios, and for me, its Hollywood Studios.  I can see where people, who are into the latest and greatest–the most hip, might be bored at Hollywood Studios, as that particular park focuses on the kind of Hollywood that George Lucas was trying to pay tribute to in his Raiders of the Lost Ark film.  That Hollywood is the cinema experience of Walt Disney, Gary Cooper, John Wayne, and screen writers like Ayn Rand as the entire park is dedicated to that era.  I love the Universal Studio parks immensely, but personally, nothing touches Hollywood Studios as they have went to the extra trouble of performing massive live stage plays like The Indiana Jones Stunt Spectacular and Lights, Motors, Action! Extreme Stunt Show while providing the feel of strolling down the city streets that built Hollywood in the first place.  It is that extra touch of detail that put Hollywood Studios over the top of places like Universal which says a lot, given how much I feel for those parks.

I was not disappointed.  The Indiana Jones Stunt Show was spectacular, the fight at the flying wing was there, the temple scene from the beginning of Raiders was there, and the epic fight in the streets of Cairo were done to the live perfection of a dance number.  It was wonderful to share in that experience with my family before things change dramatically at Hollywood Studios forever.  I’m not against the Star Wars expansion by any means.  Star Wars is my very close second favorite film series ever just a hair behind Raiders of the Lost Ark.

Movie stunts often get overlooked in movies, but in Raiders, it was impossible to ignore them.  Glenn Randall and his friend Terry Leonard did some of their best work on that film, which is why I still love it more than any other movie done.  Of course I enjoy the work of Harrison Ford and the direction of Steven Spielberg, but for me, it has always been about the stuntmen in Hollywood that I love so much about the type of films that are celebrated at Hollywood Studios in Florida.

Watching The Indiana Jones Stunt Spectacular for me is like going home to that old book my mother gave me as she wanted to encourage me to read how my favorite movie was made, hoping I would fall in love with reading.  It worked as I have read thousands of books since.  I have often thought of becoming a stunt man myself, including playing the character of Indiana Jones at Hollywood Studios when I almost moved there with my family in the early part of the 21st Century.  I have a few friends in Hollywood who are stunt co-coordinators on current film and television projects and I have thought often of taking them up on their offer to work in pictures.  I won’t name their names here as I am taboo among the entertainment labor unions for good reason – as I don’t support any collective endeavor like labor unions.  To me, it is the labor unions that have put the clamps on the kind of Hollywood I love, the kind that Hollywood Studios in Florida celebrates — the kind of Hollywood that Raiders paid tribute to in 1981.  But my brain power is needed elsewhere even though I love the feeling of an achy body that has bounced off the pavement a few times and leaped from high places into an airbag at the bottom.  There are times when I think the best job in the world would be to live in a tent in Florida and report to work every day at Hollywood Studios to play out stunts as Indiana Jones.  Watching the actor who currently plays Indiana Jones at The Stunt Spectacular may have the best job in the entire world in my opinion.  I would be inclined to do such a job untill I was 60 or 70 years old and never tire of it.

But I have too many hobbies as it is, and of course my brain is involved in a complex web of activity that reaches into an all-encompassing strategy that is epic in its own modern-day scope.  A lot of people count on me to do the things I do, and my adventures are over-the-top in ways that are a bit different from Indiana Jones, but perilous in less obvious ways.  However, deep in my mind, I do think often of the stunt work by Glenn Randall as it was communicated to me in the great Derek Taylor book from years ago.  In that way, I feel more attuned to the actors on the stage at the Indiana Jones Stunt Spectacular than just about any other place I vacation anywhere in the world.  There is a piece of my very soul that is on that stage and it is wonderful to visit during the scorching hot summers of Florida that remind me so vividly of reading The Making of Raiders of the Lost Ark by Derek Taylor as a little boy sitting in front of a fan at a home that did not have air conditioning in the blistering August month of 1981.

“Justice Comes with the Crack of a Whip!”