Skip to content
Cliffhanger the Overmanwarrior Conservative politics, Justice, Literature, Policial Science, Political Theroy, Politics, Progressive, Rich Hoffman October 28, 2013October 27, 2013 4 Minutes
Now it all makes sense why Lee Wong, the West Chester trustee looking for votes in the upcoming November 2013 election, wants to build so many sidewalks and bike paths.  CLICK HERE TO REVIEW.  Apparently he frequents the solicitation areas around town where known prostitutes reside and he wants to extend their reach with a sidewalk network extending from the slums of Hamilton into the paradise of West Chester for his own convenience.  That is the only assumption that can be made after reading the report shown below from Wayne Gilkison to Gary Yates of the Butler County Common Pleas Court General Division.  Have a look for yourself. 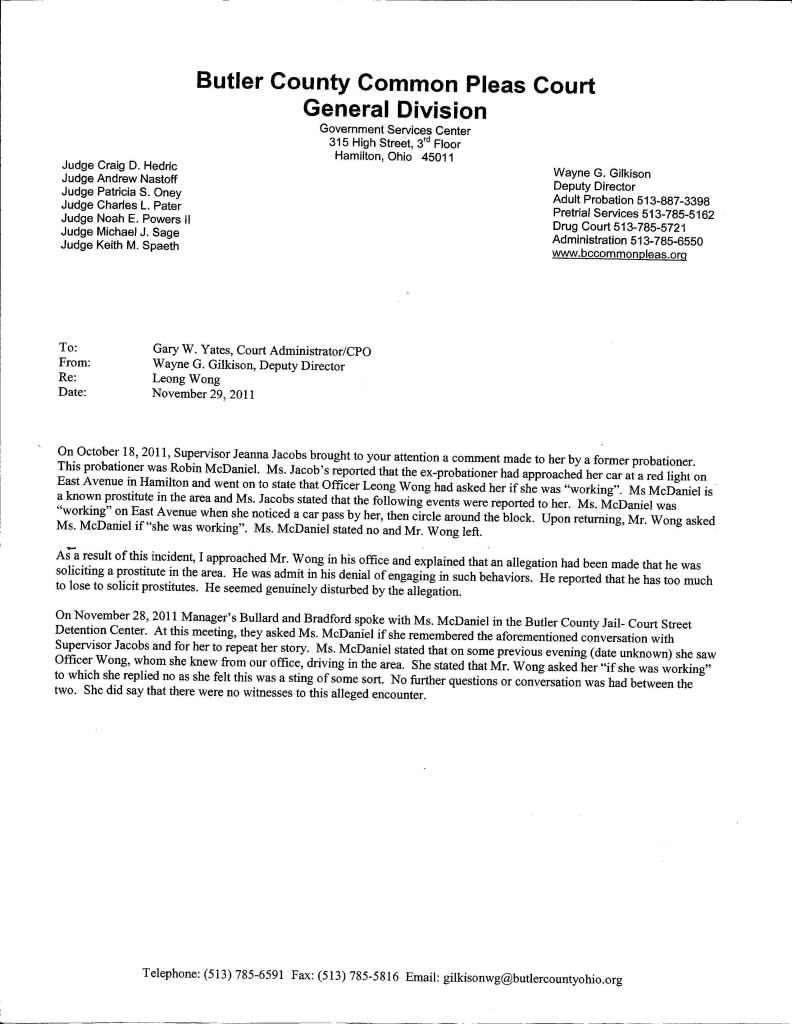 The first question I had upon reading that statement was who Robin McDaniel was and why would Lee Wong even ask if she was “working.”  I imagined that after having a lifestyle in West Chester full of clean human beings who use deodorant, perfume, and vehicles with perpetual new car smells, a woman must really be something to evoke solicitation requests, at least according to the prostitute in her statements to Jeanna Jacobs.  Well…………………..as it turns out there was a major prostitution sting in Hamilton not long ago that was covered by the Hamilton Journal and several other news outlets and Robin was one of them.  Her mug shot can be seen as follows.

I thought this whole thing was a joke, but apparently it’s not.  This is the woman West Chester Trustee Lee Wong asked if she was “working,” and I doubt he meant washing cars, or cooking in a restaurant.  McDaniel sold herself as a sidewalk salesman for the world’s oldest profession, and she looks like she was there at the beginning.  After reading the statement by Gilkison it seems that Lee Wong wishes to save some gas money so the sidewalk sluts can provide solicitation closer to home, answering the question why Mr. Wong desires so many sidewalks built in West Chester.  It is the only assumption that makes sense.

Here were the circumstances of McDaniel’s recent arrest, along with several others reported by the Hamilton Journal:

HAMILTON — More than a dozen people were arrested during a prostitution sting operation Thursday by the Hamilton Police Department.

The HPD Vice Unit was assisted by patrol officers in arresting five men who solicited an undercover officer for sex in exchange for money and five women who offered undercover officers sex for money, Hamilton police announced today. In addition, one woman was arrested for “loitering to engage in solicitation” and two men were arrested on drug charges, police said.

What a stimulating crowd, and it’s nice to see that Lee was going into that neighborhood to check up on them.  He lives very close to me, and I can’t say that I’ve come close to driving down East Avenue in Hamilton except for a couple of times during the last decade where I attended funeral visitations close to that location, or to see Sheriff Jones.  I can count the times on three fingers.  It’s just not the kind of place a person goes to purchase a gallon of milk, or buy a newspaper off the newsstand.  Why would anyone go to such a place when they live in Beckett Ridge and have Jags as a restaurant nearly at their doorway?    Is it to solicit prostitutes like Robin McDaniel?  According to the McDaniel, that was why Lee was in that part of town and asking her the kind of questions he was.

After looking at Robin’s mug shot, I’m sure Lee wasn’t the only one to ask her if “she was working,” that night, which is even more disgusting.  A man would have to have a pretty wrecked sex life to even think about going out of their way to have any kind of interaction with a person who is obviously abusing themselves as much as that prostitute has.  A man who has must have their judgment seriously questioned.  It’s not against the law to be stupid, reckless, or even personally abusive.  It’s a free country and if people like Lee want to hang out on East Avenue scouting out the talent walking the sidewalks there—he can certainly do it.  It’s against the law, but what isn’t these days.  That doesn’t mean Wong should be a West Chester Trustee.  There are better candidates who exercise far better judgment, and they should get a chance.

Whether or not Lee Wong intended to engage in sex with the known prostitute on East Avenue by the name of Robin McDaniel, I can think of about 1 million things that are better to do at night than driving down East Avenue for any reason—especially living in West Chester.  Any man who does find themselves looking for some sexual relief in the bad parts of Hamilton have issues that are detrimental to themselves and are likely carrying over into their professions, and families—and that is simply reprehensible.  That being the case Lee needs help, but what he doesn’t need is another term as trustee of West Chester where critical decisions about the community’s future need to be made quickly—and correctly.  And that is pretty hard to do when desiring sex with East Avenue prostitutes is on the radar of desired recreational activities.