Skip to content
Cliffhanger the Overmanwarrior Budget problems, Conservative politics, Justice, Literature, Policial Science, Political Theroy, Politics, Progressive, Rich Hoffman, Taxes March 26, 2014March 24, 2014 7 Minutes
In “The Dream of the Virgin,” by Christoforo Simone dei Conrocefissi—a painting of Jesus Christ emerging from a dead body in the form of a tree–a bird atop the crucified figure of Christ has bothered me for a number of years—since the early 90s when I first saw it.  The bird is a pelican which according to the nature lore of the European Middle Ages nourishes its young on blood drawn from its own breast. 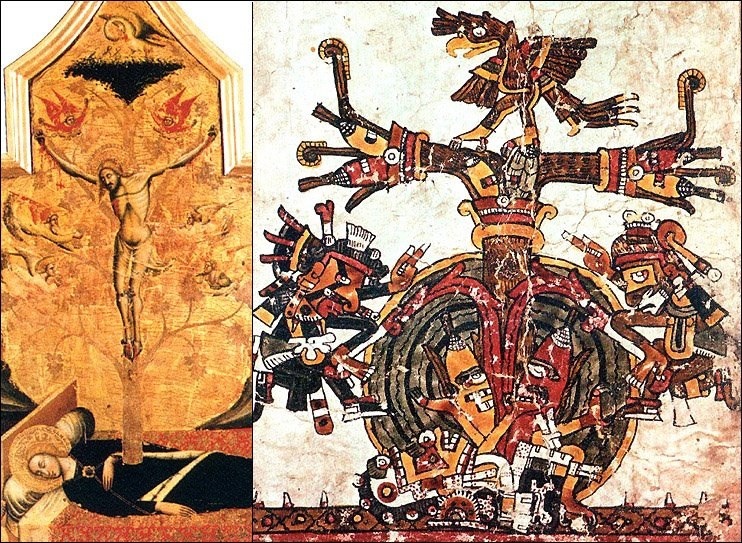 It is used in the painting to show the proper metaphor of how Christ through the giving of his Holy Blood has nourished mankind into Salvation.  About that same time the pastor of my Lutheran Church of Holy Cross in Fairfield, Ohio was suffering from a divorce where his wife ran off to find freedom from the rigidity of being a pastor’s wife.  She wanted to live a free life away from his judgmental existence and bicycle across the earth free of God’s appraisal.  As I looked up at the lit up cross in that church my parents helped keep alive for many years it was a measure of a 20 year journey into philosophy that leaped well beyond the good foundations provided by my years there. Holy Cross for me was my first exposure into a journey that would outgrow the little church starting at the point of time mentioned.  Over the next two decades I would only return a handful of times that would finally end on March 23, 2014.  It was the last service of that church, my parents were the ushers and a substitute pastor headed the service which would be the last one.  There was no new generation to take over, and the church was finally closing.   It first opened in 1957, my parents were married there, my wife and I were married there, we were all baptized there, some of my nieces and nephews and most of my first acting and public speaking was done there.  Prior to the 90s, I performed every job at the church except conduct the actual ministry and play the organ.  The church had played a huge part in my life which put me on a path to fight evil with a foundation started during my youth.   Now during this last service as we all readied to take communion one last time that painting was coming back to me resurrecting the ridiculous role of the pelican.  That was what I thought of as I was handed bread representing the body of Christ.

I have told people who didn’t understand why I stopped attending Holy Cross that it wasn’t that I was becoming an atheist or had lost “faith.”  I had just outgrown the church which of course nobody understood, particularly parents who had given so much of themselves to it.  For me, the failure of the church was not in its message of goodness, in helping people and having spiritual value—it was in the ideal of sacrifice.  I had continued to study literature well after my Bible study days and moved into comparative religion heavily from 18 to 19 years of age.  I learned that it wasn’t just Lutherans and Catholics who had these stupid concepts about sacrifice—it was all religions to some degree or another—and I saw clearly that politics was exposing this weakness taught to the masses of humanity for their own exploitation of power.  Now a pastor I had studied with closely over many years had a wife leaving him and it was obvious that God wasn’t coming to his rescue.  Bowing on his knees to a savor wasn’t going to bring the woman back.  The situation was much more complicated and I needed to understand the answers for my own life.  Blind trust into some mysterious beings behind a curtain was not enough for me.  For many of the people I knew, it was—and I saw that as an intellectual limitation that would not be sufficient for my family.

I left the church unofficially because of the false premise that sacrifice was needed for human life to move forward.  Creativity is the real driver of advancement, not pouring the blood of Christ into a cup and drinking it on Sunday.  Softened rituals of human sacrifice which is what Lutheran communion was only served in providing basic childlike foundations into living a life of goodness.  It did not help a person live a life where they are in control, where they are accountable, and they dictate the fate of their own existence.   So I continued on and only returned for big family events until this last service.  I couldn’t help but notice the tears from the audience, listening to the organ from the balcony, the lit up cross I had spent so many Sundays and years helping keep the place alive.  I looked out the window at the same trees I looked at growing up.  They were a little bigger, but mostly still there.  During sermons I had stared at every line of every brick in the front wall of a church that was quite a popular place in the 70s and 80s.  Many of my first girlfriends came out of the church.  Even during some of my most rebellious years mentioned prior, I still attended church at Holy Cross almost every weekend.  It had become a sanctuary of goodness for me over the years that I had a lot of value for.  But not enough value to sacrifice my life to, or the lives of my children.  The church was not more important than me and my family and that is a tough concept to explain to people who have not taken those steps.

The drastic difference in thinking was that sacrifice was a concept which should be abandoned—the ideal that something must be given up so that something can come to be.  I was not going to teach my children that sacrifice was needed to live—but that it was creativity that brought everything into being and that God was the factor behind inspiration and drive.   The ideal of someone sacrificing their life so that I could live was something I decided to reject and would spend my life going forward living from my own spontaneity and creativity and I would teach everyone who wanted to listen to do the same.   That way of thinking is not for everyone.  It requires a firm footing upon a foundation of goodness, and I gained that foundation at Holy Cross Lutheran Church and my parents did a wonderful job introducing it to me.  Many of my first books, which I still have and treasure are Bibles and Bible Encyclopedias.  In my pastor’s office when I was personally instructed by him I always admired the books on his shelves—literature was very important to him. But at a certain point you outgrow it if growth continues, and for me I could have stayed stagnate and thrown myself at God’s mercy the way the pastor did when his wife left him, or I could take control and move past him—well past him and shape my own destiny through creativity—not sacrifice.

One last time I took communion out of respect for the ceremony and I felt sorry for those who were still confined to the ideal of sacrifice.  They were good people, but they were stuck—and happy to be there.  Like the pastor from two decades prior, who was now deceased, it was easier to pray to God, trust in the wisdom of His benevolence than to take personal responsibility through personal creativity to lead one’s own life to a conclusion of self motivated destiny.  It is far easier to bow and eat bread, drink wine, and pray and leave the responsibility for living to the universe.

As I put the communion cup down for the last time alongside the northern windows I felt the heat of the building pushing warm air through the heating system. I would miss this church—because I wouldn’t be able to come back ever again.  It was closing, and at the end of the service, it would finally be gone forever, and it was a sad moment.  The building was alive and had been since 1957.  I had grown up and felt that heat most of my life but now I felt not just sad that it would be over—but that it was now like a pair of shoes that I wore when I was a child which I could no longer wear—and I felt bad that I couldn’t teach everyone to also outgrow their shoes.

Holy Cross closed with the stripping of the alter—with no music and the slamming shut of the church log, sniffles permeated the vaulted ceilings, the classic lights, the candles which were now extinguished and the gentle rumble of the heating system pushing warm air into the congregation.  The church had cared for its people attending worship for so many years, and now it was over—and it was sad.  But the ultimate failure was not the changing demographics of the area, the declining morality of society, but the concept that sacrifice was needed for a fruitful existence.  Every institution which subscribes to those types of theories ends just like the lives which give shape to them.  Sacrifice is the wrong approach to everything because in the end things just end, like marriages, churches, lives, and minds.  For something to live on, it requires creativity because without that—nothing happens—and that is the secret to success, love, and life.    The only pelican in my life are the ones I feed in Florida when I visit Tampa, who wait for me to feed them a fish.  They don’t give me back anything in return except for the joy of watching them eat it.  The European lore was wrong and all those who followed it.

2 thoughts on “The Closing of Holy Cross: Pelicans of European lore”