I was more than just a little surprised to find in Ross Hamilton’s very good academic paper, A Tradition of Giants: The Elite Social Hierarchy of American Prehistory that literally in my back yard at the Miamisburg Mound two full skeletons of an ancient race of people standing over 8’ tall was found. I’ve known about the mound for quite a long time, but didn’t think much of it, as I live in the land of mounds. By default, Fort Ancient and Serpent Mound have drawn most of my attention. Even in conventional archaeology book descriptions Miamisburg Mound is not given much fanfare as a relevant archaeological/anthropological memorial. I have done articles about American giants before, largely for fun, but the more research done into this strange phenomena the more obvious there is of a government cover-up on a massive scale and the evidence is legitimately right in America’s back yard in Miamisburg, just a few miles north-east of the Dayton Mall. 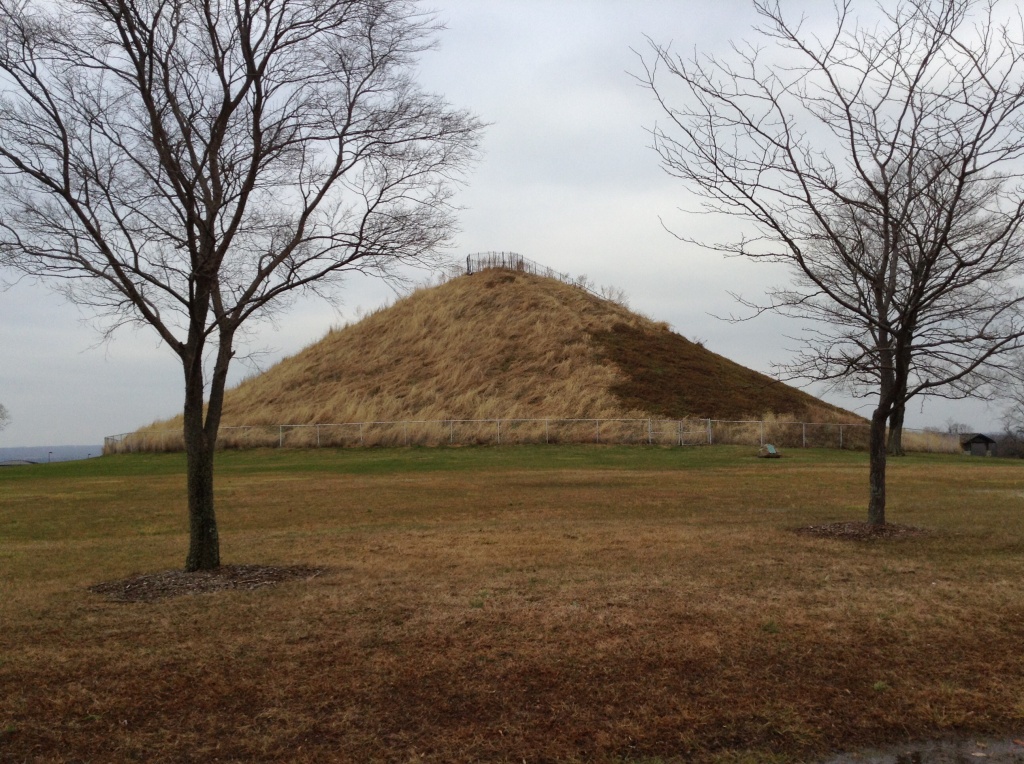 Reading through Hamilton’s paper linked above two entries caught my attention in a big way as stated:

The body of a man more gigantic than any ever recorded in human history has been found in the Miami Valley in Ohio. The skeleton, it is calculated, must have belonged to a man 8’ feet 1 ½” inches in height. It was found within a half mile of Miamisburg in a location which contains many relics of the mound builders. Edward Gebhart and Edward Kauffman discovered it while they were working in a gravel pit…The bones have been placed on exhibition and many are the curious sight seers who have passed in wonder before them…Prof. Thomas Wilson, curator of prehistoric Anthropology, Smithsonian Institute, says of the find: “The authenticity of this skull is beyond any doubt. Its antiquity is unquestionably great though it is impossible to have a good guess as to its age. To my own personal knowledge several such crania were discovered in the Hopewell group of mounds in Ohio.

Reading that description it would place the discovery of that skeleton west of the Great Miami River across from the large park that sits between Chautauqua and Miamisburg. The other description was even more jolting. It is as follows:

“A pioneer relates that whilst powering in a field adjoining it [the Miamisburg Mound attributed to Adena], he discovered a grave of extraordinary size, which proved by actual measurement to be not less than ten feet in length. Upon one occasion, after a heavy storm had swept over the vicinity, a massive oak tree was up-rooted and from its bed came up a gigantic skeleton complete. Owing to some neglect, however, it was not preserved.”

A visit to the mound site will show that on two sides of the mound north and south are ripe areas for the discovery of that giant skeleton. To the south is a neighborhood, to the north it is now a golf course. Looking at the mound it is obvious that one of the goals was to place the burial elements within it at an elevation superior to the surrounding countryside—particualrly to the west where the setting sun dips over the horizon each evening. The point of the mound is at 981 elevation where the high spots across the river to the west peak out at 900 feet. Only to the east near where the I-75 corridor passes through does the elevation increase to 1000. The mound architects were artificially attempting to raise the level of that particular hill-top to surpass the surrounding countryside. Excavation at the mound has been limited and ridiculously reckless. For such a site only a preliminary attempt at understanding was made in 1869 which discovered a skeleton 8 feet from the top which was approximately 68 feet in original height. Then digging down another 36 feet another burial vault was found. Without question, another 30 feet of exploration at any point around the 877 foot circumference would likely produce more skeletons and a much better understanding of what type of civilization lived and constructed such a magnificent human endeavor as the Miamisburg Mound.

It is not enough to stick a plaque in front of the mound memorial site and say that Adena Indians built the site then died off or were pushed out of the area by Indian relocation methods. There is much excavation that needs to be done at the Miamisburg Mound site and there is simply no excuse not to. Nearby University of Dayton could fund such a dig with the proceeds of one Dayton Flyers basketball game, yet nobody even steps forward to try………….why? It’s not like the site in is the Middle East and too difficult to obtain permits from the volatile governments there. It’s not like it would cost a whole summer of travel to a far away land to spend in time and money. This site is within a few miles of the Greene Shopping complex. A dig at the Miamisburg Mound site would be luxurious for any anthropologist, and fairly cheap. So why isn’t it being done? I’ll get into that more with another article that is much more sinister. But for now, I will make this proclamation that I’m absolutely sure many other people know—there is proof of a race of giants under the Miamisburg Mound. Two of the largest skeletons of human beings ever found anywhere in the world have been discovered in the Miamisburg area and a gigantic burial mound shining on a hilltop like a beacon of invitation has not been even remotely explored by modern excavation methods because science already knows what they’ll find there.

When I visited the site over the first full weekend of December 2014 a used condom greeted my boots when I stepped out of my car. I didn’t step on the disgusting relic of some primitive sexual conquest performed in a park devoid of any real interest. As I looked around, the park had built a nice playground and some picnic areas, but had utterly failed to conduct a proper examination of the mound site for nearly 150 years—which is just inexcusable.

So until science can prove otherwise, based on the written and oral traditions of the Miamisburg area—before the government swept in and claimed the area mysteriously for nuclear research—giants were discovered in the area of a previously undocumented race that had technical ability not associated with any known Indian culture. The evidence is likely just a few feet from the playgrounds, the picnic area and the used condom that was in the parking lot during my visit. Just a short shovel depth into the mound likely would prove the assertions of Ross Hamilton’s academic paper. Likely, because the bones are in the Smithsonian log, the government knows what to expect in any excavation attempt into the Miamisburg Mound, and they really don’t want that information getting out. The reason will be the subject of my next article—but for now the evidence of a giant race of people is right in our back yards. All it would take to officially discover them is for us to do a little digging and prepare ourselves for the astonishing truth about our ancient past in America.