Before there was ever an Indiana Jones movie my teachers were telling me through those scholastic aptitude tests you take in elementary school that my three most likely occupations that I was most suited for were as an archaeologist, a test pilot, and a daredevil.  Of course those last two they didn’t take very seriously, but the first came after watching me with the other kids at COSI in Columbus where I often went off by myself to study things that interested me and I asked questions from the workers that were unexpected.  Over the years my wife talked me away from being a professional daredevil which has cheapened the cost of owning a car—so that’s a good thing.  Being a test pilot required training in the military and that is way too conformist for me.  On the skill side, it would be no problem, but on the taking orders side—forget it.  And archaeology didn’t pay enough.  I wanted a family and I like to spend time with them, so running all over the world getting dirty all the time for very little money wasn’t appealing as a career.  But I do enjoy it as a hobby and have never really put it away.  As a kid I grew up in Liberty Township and watched many neighborhoods develop over top of Indian burial mounds which didn’t bother me much because I like seeing new things come from the human race.  But the land that I grew up on always seemed to me to be holding some key to civilization that needed to be unlocked, so when opportunities came for me to live in different places around the world like New Zealand, New York, Los Angeles and Florida came up—I passed because I honestly feel like I live in one of the best places in the world—and I’ve traveled plenty to know the difference.

But it was only after reading Fritz Zimmerman’s very good book, The Nephilim Chronicles: A Travel Guide to the Ancient Ruins in the Ohio Valley that I noticed that the so-called Middletown Mound that I’ve read about before was actually across the river from my house quietly hiding in plain sight.  It was only then that I realized that the mound was actually about the same size as the Miamisburg Mound which I just revealed to everyone who reads here–contained the skeleton of a species of ancient giant.  That skeleton measured in length to around 9’ tall.  After that discovery the excavators packed up and never returned—which to me is an enormous mystery.  It is my challenge to the scientific community to return to that site and conduct a proper modern excavation and learn all they can about the culture that built the thing and discover where they came from—because likely the roots go way back to the British Isles and even further to the times of the Sumerian—pre deluge times if you believe in that kind of thing. 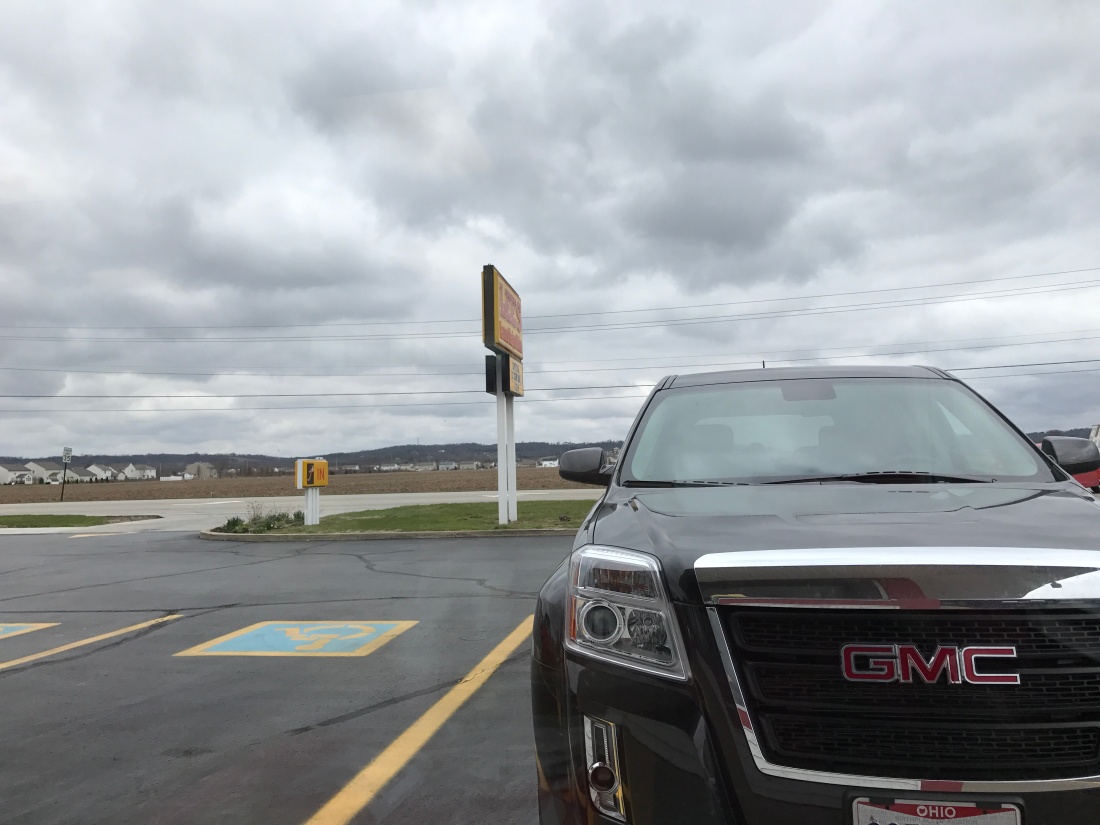 Thankfully, because of Indian Jones movies archaeology has seen a tremendous uptick in interest for the last three decades and a lot of very good discoveries have been made around the world and things are starting to become quite clear.  Of course the stubborn old academics are grudgingly holding onto their old theories about things, and modern politics has built a tremendous industry around the victimization of Indian tribes using those beaten people as a platform to win elections—but we are discovering that ancient giants lived in North America well before Columbus ever sailed the ocean blue to “discover” the New World.  It was new to Europe, but the rest of the world including the Chinese were already there and thriving.  And the evidence is in these mound building cultures which has been acquired by many inspired professional and amateur archaeologists that have set the stage for new conclusions about old things and their origins.

So as I was reading through Fritz’s travel guide I noticed that the Middletown Mound wasn’t just some little thing like the ones that many Liberty Township neighborhoods were built over—it was 88’ tall originally which made it as large as the Miamisburg Mound and nearly as tall as the Silbury Hill at Avebury in England.  And the thing was literally sitting right within my site—but nobody knew about it.  Even the people living near it would just point at it and say—“yeah, that’s where them there Indians have some ‘ingines’ buried.”  In reality, and its hiiiigglly likely, there are 8’ to 9’ people buried within the Middletown Mound given what we know about the one in Miamisburg and the surrounding gravel quarries along the Great Miami River.

Of course I went down to see it and you can see the results from the pictures shown here, it’s a location protected as an archaeological site of Historic Places beginning in 1971.  So thankfully, nobody can build on it, but otherwise it’s just sitting there waiting for us to discover and give it some attention—which it clearly deserves.  It is clear that archaeologists had dug an exploratory trench through the middle of it and that the top had been pulled away, but the incomplete nature of it is incomprehensible to me.  How could anybody call themselves an institute of science and leave something this significant sitting in such a dilapidated state?  It is beyond me that politics and religion would be allowed to hinder us from proper scientific discovery of facts sitting right in front of us. 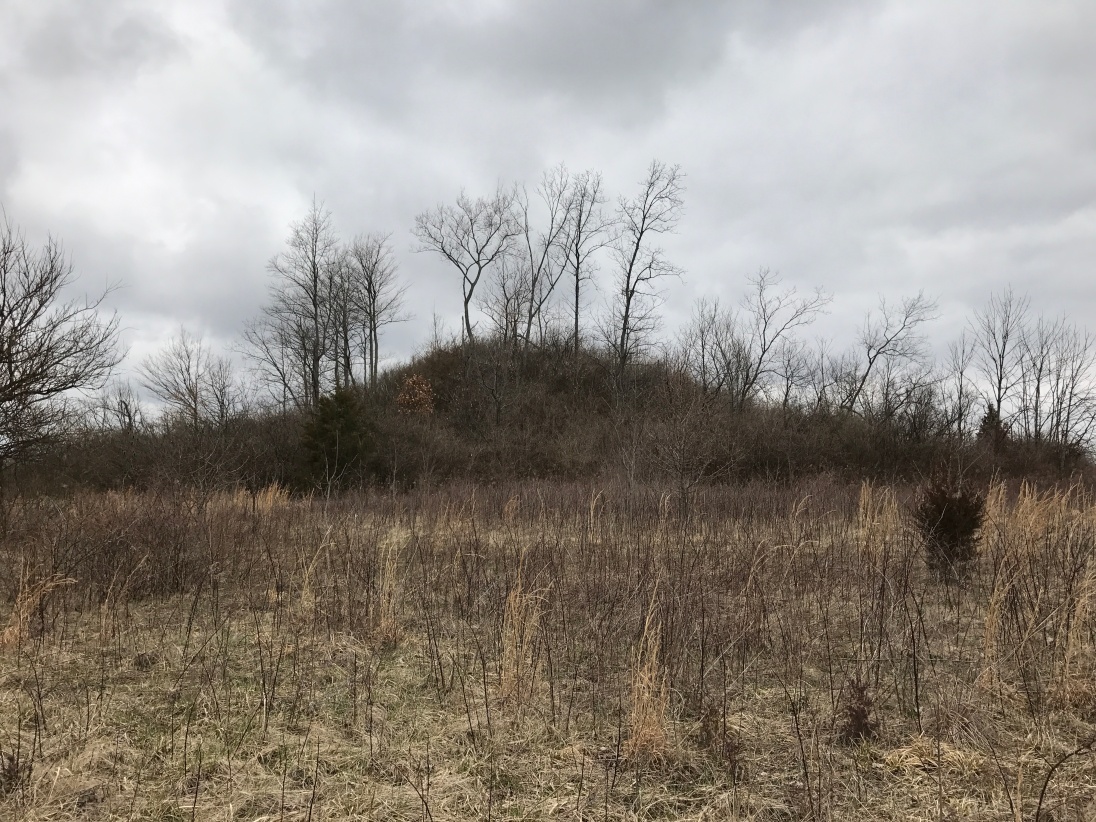 If this Middletown Mound site were in England the English Heritage people would have built a theme park out of the mound and used the money to fund their excavations and trickle their excess funds into museums like the Museum Center in Cincinnati.  Looking at the site there is enough to work with to conduct a significant dig while hosting it to the public for families to visit and get to know better.  And if giants are found in the mound—they need to be properly woven into our historical record.  If not, we still need to know more about the people who built it and not just rely on some raw assumptions that it served as a high point for communication upstream.

And honestly, this is why I have never left Liberty Township.  I think this area, and in general Ohio, hold a key to life on planet earth that is still preserved from wars which have destroyed the Middle East—where I think these mound builders originated.  Fritz Zimmerman’s books confirm much of what I’ve suspected with hard evidence of rather intricate ancient ruins and the Middletown Mound is more than just a high spot built by an extinct people.  It’s an ancient ruin likely dating back to before Christ and it needs to be understood clearly—not half cocked with speculation by underfunded grave robbers.  After visiting the site of the Middletown Mound I think there is at least 80% potential that what could be discovered inside would change the very nature of archaeology forever—and drive infinite amounts of money in new funding toward the science.  And we’d be crazy not to do something about it—which is why I’m writing this.  The people who read here know who I’m talking to.  Let’s get our thoughts together and do something about it.  Such an important archaeological contributor is in Butler County, Ohio and we should do it justice for the benefit of everyone.  I saw what they did at Stonehenge recently, which was very impressive.  Some might say that this kind of thing isn’t as cool as Stonehenge, but let me say this—I just came from that mysterious place, and the Middletown Mound holds its place in the category of mystery that is equitable.  We should be doing more with it than just letting trees grow on top of something so potentially significant.  But forget about the whole argument about the site being a “Native American Graves” site, because as I’ve stated, the Native American Graves Protection and Repatriation Act (NAGPRA), Pub. L. 101-601, 25 U.S.C. 3001 et seq., 104 Stat. 3048, the United States federal law enacted on 16 November 1990 needs to be repealed so that proper discovery can take place of such sites—because “Native American” is not a proper term for the people who lived in North America unless you count the Giants of Ohio who lived here well before Europeans arrived after Columbus.

And we can’t properly do that work if we are always apologizing for the sorrows of westward expansion.  That is mostly why that great Middletown Mound is sitting there in limbo—and we are compelled to change that status.  The lineal descendants of the relics found in the Middletown Mound won’t be the Shawnee, Adena, or the Hopewell Indians, likely they will be the members of the current Middle East who have a heritage with Sumer. So don’t worry about tracking down whatever Indian tribe might own the relics found in the Middletown Mound to Oklahoma or South Dakota, or wherever.  The lineal descendants who have proper heritage possession of the mound’s contents are those of us still alive in the United States to tell this global story for the benefit of all mankind.

One thought on “The Great Middletown Mound: A proper excavation is needed to discover the giant humans inside”