It pains me to say this, I love Steven Spielberg, I love John Williams, I even like Amazon’s Jeff Bezos—so what on earth are these idiots talking about regarding the merit of the “free press.”  In his new movie The Post, Spielberg, Tom Hanks and the eternally liberal feminist Meryl Streep act like they are changing the world with this rush job loser of a movie yet they had to get it out before the close of 2017 to qualify for the awards season.  Aside from the obvious political message the film is very sloppy—like it was made by college students—not the most successful filmmaker in the history of mankind.  The story is amazingly political.  The premise suggested by the movie—that the free press is our only vanguard against corrupt presidencies is completely ridiculous.  The Washington Post—the newspaper currently owned by Jeff Bezos isn’t a free press—it’s a liberal mouthpiece for the political left and a tool for trying to eliminate conservative politicians from races of consideration.  They are as corrupt as any K-Street lobbyists and couldn’t be considered trustworthy by any stretch of the imagination.  It’s amazing to me that Spielberg and Hanks would even suggest that there is some moral authority for which The Post had to speak from—because such a thought is one of the biggest fantasies in Spielberg’s long career at making movies—and that includes his version of Peter Pan in the movie Hook.

Like most things on the political left the foundations of thinking are rooted in disjointed emotions and a viewpoint from the bubble of the liberal neighborhoods they currently live in. The Obama administration as we have learned very late in the game was one of the most corrupt administrations in the history of the world—you’d have to go back to the Roman emperor Nero for a comparison—and The Washington Post has been silent on the matter—yet it has fully advanced the false notion that Russians are the reason Donald Trump won the presidency.  The American people don’t have faith in the left leaning “free press” of The Washington Post, The New York Times, and CNN.  Liberal people do because those outlets say what they want to hear just as Fox News traditionally might feed the political right a viewpoint favorable to their sentiments.  But facts are facts and many news outlets including Disney owned ABC has deliberately sat on stories to prevent the political left from looking bad.

Before Donald Trump’s election to the presidency I would occasionally buy a New York Times newspaper at my local Barnes and Nobel bookstore just to thumb through the pages and see what was going on in the world from the viewpoint of New York City.  I was able to overlook their obvious liberal bias because it wasn’t nearly as “in your face” as today’s anti-Trump media has been.  I even would read The New Yorker from time to time to keep up with the cultural drivers of our time—so I’m hardly a closed-minded Republican.  I’m a Ohio conservative so I am used to dealing with propaganda from the political left, even Fox News is now owned by the Disney Company so if I want to participate in the world, I have to deal with liberals.  But my beliefs aren’t just regional—because I was born in a conservative area, had conservative parents, and conservative grandparents—etc.  I’ve navigated through my adult life as an avid reader of history.  I never get drunk for any kind of entertainment as I love my mind more than anything in the world—and I enjoy feeding it good things—so my thoughts on things are formed by evidence as it plays out in the world—not what “people” and their viewpoints think of it.  For instance, for the third time in my life I am reading the big version of Adam Smith’s An Inquiry in the Nature and Causes of The Wealth of Nations shown in the included picture.  All the books in that stack for instance are my January 2018 projects and I will have them all read before the upcoming Super Bowl.  That stack is a continuous one that resides next to my reading chair.  The contents of the stack are ever-changing, but the stack is always there.  The point of the matter is that I am not drawing my conclusions about the nature of the “free press” based on any kind of pop culture sentiment—it is through the long view of historical perspective—so it deeply surprises me that Steve Spielberg—as an artist would allow himself to get so caught up in the local vantage points of his liberal Hollywood friends—because if they think the current Washington Post is anything more than a blog for the liberal views of Jeff Bezos—they are smoking crack and should be arrested immediately. 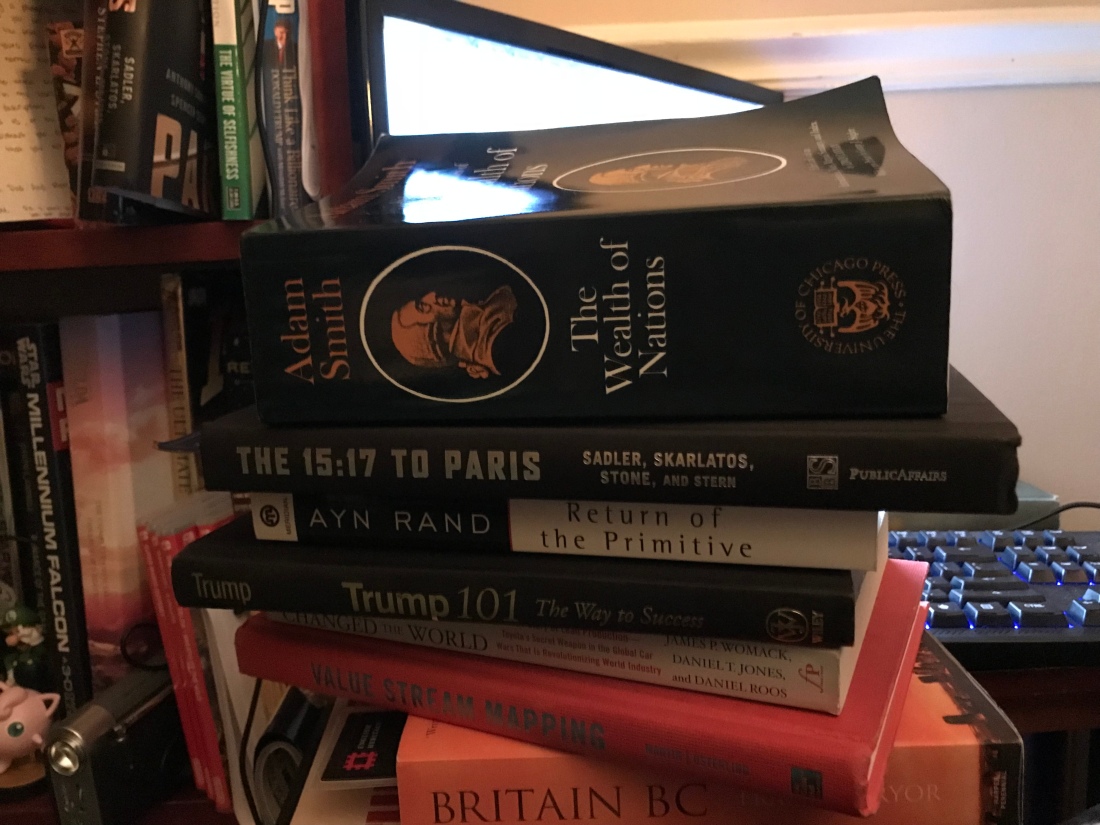 When the free press becomes part of the problem as it is now, we have no choice but to fight them.  We have watched them actively hide crimes from our faces much more severe than The Pentagon Papers ever were.  If that is the criteria of merit as shown in The Post—then where is the outrage over the crimes Hillary Clinton herself committed?  What about the FBI using the press as a way to hide their crimes and manipulate public opinion in ways they approved of?  What about that smidgen of evidence which continues to pour out of the Obama White House when it used the powers of government to crush political opponents and unmask competing administrations as they came into power?  The Trump administration was just trying to put together their team when Obama and his activist Justice Department was unmasking members of the transition team as a way to destroy them before they ever got started.  What they learned they leaked to that “free press” to work in cahoots with the aims of the political left to advance a sentiment for which the American public had just voted against–so much for a “righteous” Washington Post.

The essential premise of the movie, The Post is completely ridiculous and I’d expect much more out of these seasoned filmmakers than to propose that the free press especially in this modern era is anything less than another potential villain of misinformation with an agenda.  I’ve been involved in some of those little parties where some ditzy blond starlet yaks on and on about animal rights, women in the work place, and how wonderful Bill Clinton was in the White House with her tits falling out of her dress, drunk hoping to seduce her way into a movie role.  That is the world of Tom Hanks and Steven Spielberg—they are bombarded by those types of people almost every day.  And actresses like that don’t really care about animal rights.  If by some chance she thought the film producers were conservative, she’d go on and on about the greatness of the NRA and how tax cuts helped her buy a new car as she was trying to make ends meet until her next movie role—(wink—look at my boobies).  But we expect more out of filmmakers who are as seasoned as Spielberg is.  Sadly it appears he’s become caught up in all this anti-Trump Hollywood sentiment and he is looking for another Oscar by appeasing those liberal members of the Academy with some red meat to fulfill their fantasies.  Yet all he’s really shown us is that he can’t be trusted to tell the truth either—as an artist.  He has become just another political hack, like the rest of them.