Another thing that voters need to understand in the Lakota school district as they vote on November 5th 2019 to cast a ballot for new school board members, is where they stand on the transgender bathroom policy. Clearly by the video below, and on many other issues there are two right thinking candidates, and two who are out of their minds. The two good ones are Lynda O’Connor and James Hahn. The two bad ones are Ray Murray and Julie Shaffer. What makes Ray and Julie bad are several things, but for this particular circumstance its their policy of allowing sex to determine the focus of a taxpayer funded education that makes them such villains. Lynda and Jim are against the proposal of taking away parental rights from their children by allowing transgender kids in locker rooms and in the general bathrooms. Transgender politics is a dangerous progressive platform that is driven by government schools and is meant to erode away family value so that children are raised under the umbrella of an all intrusive government. The issue is not about fairness, its about family destruction. Listening to Ray and Julie below I would say they are not savvy enough to understand the politics behind the movement. And that makes them even more dangerous to the Lakota school board, because they are pawns to a progressive policy without even knowing it. But if left to them, if Julie and Ray are on a board together, you can bet they will be voting for transgender bathrooms and locker rooms. Listen to them for yourself:

In many ways Lakota dealt with this years ago, and Lynda O’Connor was part of the leadership in creating an option for transgender kids with a separate bathroom. The continuation of this issue proves that the agenda is not about keeping kids from committing suicide because boys want to be girls, and vice versa. It’s about eroding away the values of students into instruments of progressive thought and turning them into activists for change into a liberal, anti-traditional family direction. To be clear, Jim and Lynda working together on the school board would prevent further transgender issues from becoming a distraction. Ray and Julie would perpetuate the issue and vote to allow mixing boys and girls into general bathrooms and locker rooms. They are weak people who are not very smart making them easy victims of the aggressive teacher’s union. The union has supported both of them because they know that Julie and Ray are easy targets for their agenda of progressive considerations. To prevent this issue both Lynda and Ray would need to be elected because currently Lynda is outvoted on the board two votes to three for approval. The only thing stopping it currently is this upcoming election.

Its hard for many people to admit, including school board members, but education is much less about teaching kids anything, but is more about changing them into progressive activists. In many ways, no discussion about sex should be going on with taxpayer funded efforts. Liberals have been pushing for years to continue lowering sex education among student populations into younger and younger ages. In many cases students aren’t even thinking about sex as public schools are proposing teaching about it in the fourth and fifth grade. Progressive planners at the state level who make up these curriculums know that most children are home alone and bored out of their minds as both parents work these days. And when kids are thinking about sex, they are easy to control especially at school because the teachers become the adoptive parents. Julie isn’t thinking in such conspiratorial terms and Ray is too busy smoking pot and digging his hands into the pavement of Chicago streets to think very deeply about anything. But those are stories for other articles. For this, they just do what they are told by the union. And believe me, the leadership within the unions are all about advancing the progressive anti-family national position of their liberal organization.

Transgender issues are a minority and to provide them with a bathroom to use is fair. Anything beyond that is disruptive to the other students. I could go back to my school days and tell lots of stories as these issues were just becoming part of the narrative. I was a very good athlete and obviously all the school coaches wanted me to play on their programs whether it was basketball or football. I liked playing the games, but I hated, HATED undressing and dressing in the locker rooms. I hated it with kids of the same sex. I can’t imagine it with people who were openly gay and girls who were claiming to be boys. Nudity for me was always a very vulnerable position. I grew up going to church every week. My mom was a housewife and we had a very traditional family structure so I had clear definitions of right and wrong and not being vulnerable around strangers.

We have learned over the last decade or so however that sexual manipulation is actually very common among coaches and students and creating conditions where kids are getting nude is meant to teach them to lower their defenses. With me, I never did. I just didn’t play the sports, because I didn’t want to be stripped of my clothing and assimilated into a Borg Continuum that they called a “team.” I would say that most people reading this are at least my age or older, so they likely had similar experiences and all this modern talk about transgender locker rooms and bathrooms is beyond their understanding. But its quite an obvious attack on our lifestyles in America and its on purpose. It is happening at Lakota. But it is happening everywhere that the teacher unions touch taxpayer money.

When Julie Shaffer says that over 70% of students are thinking about committing suicide, she is talking about 70% of something like 2% of the student population, overstated on purpose to exacerbate the issue for overly emotional people. Rather than deal with the exceptions the progressive position is to use the exceptions to change the standard and drag more and more kids into the confusing condition of sexual identity when most of them can’t even read a book or do basic math. And that is the real crime. Even if nobody wants to believe that progressives at the state and federal level are attempting to destroy the American family with these transgender policies, the truth of the matter is that while we are talking about these issues, kids aren’t learning what they should be, so a change is desperately needed if we are to save them at all from these dangerous educations. What is absolutely certain is that if either Julie or Ray are elected to the Lakota school board, then they will have the votes to advance this agenda. They both support it, you heard it from their own mouths. But if Jim and Lynda are elected, then the issue will be held off and parents will retain their rights to at least manage their children’s sexuality as they should have the responsibility for. Its not the school’s place to stick their noses into such a small topic of the human experience and anybody who says otherwise is looking to limit the intellect of young people with such a trivial topic to consider. Which to my mind should be a crime. But for now, its at least subject to a vote and with an election, we can stop the continued damage. 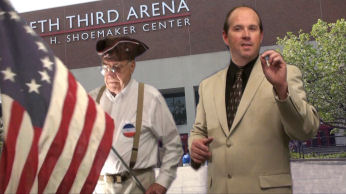 One thought on “Julie Shaffer and Ray Murray Want Transgender Bathrooms at Lakota: Lynda O’Connor and Jim Hahn could stop them if elected”